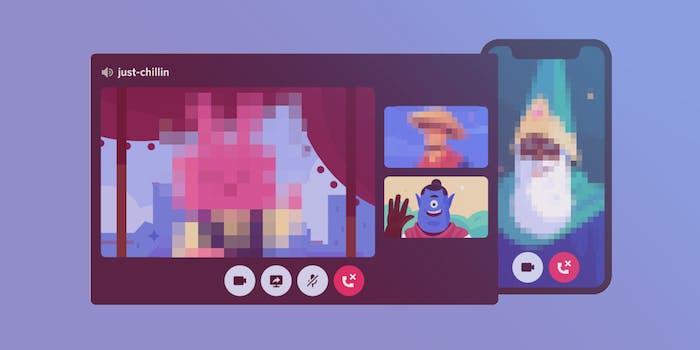 It's not just politicians trying to ban NSFW content.

This month, social media messaging app Discord cracked down on NSFW content access for iOS users. After popular backlash, Discord walked back some of its restrictions—but not all of them.

In its revised iteration, Discord will ask 18+ users to opt in to NSFW content on desktop before being allowed to view it on iOS devices. NSFW servers deemed “specifically focused on explicit pornographic content” will still not be accessible on iOS altogether.

When reached for comment, a Discord representative told the Daily Dot that its NSFW restrictions were made in compliance with Apple’s iOS App Store policies. Apple, as the Verge notes, has “firm restrictions on nudity in the App Store” and only grants developers an exception for “incidental ‘NSFW content'” via user opt-in.

Twitter, Instagram, and Facebook have all faced credible accusations of shadowbanning sex workers. Safe harbor for smut creators is becoming increasingly rare online; even independent art site Artoful officially banned 18-plus material in its terms of service this month.

Social media censorship reflects ongoing institutional crusades against adult content and its creators. In 2018, SESTA-FOSTA dealt a significant blow to sex workers and their online communities. In 2020, the EARN IT Act bill promised to kneecap Section 230 protections, followed by the equally censorious (and widely panned) SISEA.

While political anti-porn stances are nothing new, adult content’s increased scrutiny from above should be alarming. Institutional gatekeeping over sexual material would devastate free sexual expression online, robbing sex workers of their income and removing queer access to LGBTQ adult artwork and sexual health resources.

“If private companies are compelled by governments or advertisers to be arbiters of what parts of our bodies is ‘acceptable’ content, the social progress of the past decades will slow,” Jillian York, a director for the Electronic Frontier Foundation, wrote for Salon. “New technologies like virtual reality … are coming of age; if such new platforms are held to puritanical, censorious standards, then yet another mode for self-expression will have been diminished before it even fully gets off the ground.”

Behind all these bunk studies comes a pervasive cultural fear that pornography will demolish the hallow grounds of sexuality and corrupt every American.

This is a moral panic, and for Americans, it’s a beloved pastime. Vox’s Aja Romano argues the “Satanic Panic” of the 1980s is “alive and well today,” and its legacy is seen “through American culture and politics, in everything from social media moralizing to QAnon.” (Romano previously contributed to the Daily Dot.)

As Romano notes, the irony of the moral panic is that it damages its supposed victims most—in the 1980s, children—by silencing them so that the panic may play out for the anxious group’s benefit.

“Through it all, the media fueled a public wave of fear that spurred entire groups of rational, thinking adults to collectively buy in: parents and prosecutors, therapists and investigators, jurors and judges, reporters and readers,” Romano warns. “In a time of deep social upheaval, it’s all too easy to see those mechanisms falling into place once more, ready to bend toward the next unresistant, easily ostracized stranger, eager to label them ‘dangerous.'”

Indeed, the media is just as guilty as TikTok for stoking the flames. In December, the New York Times sparked an anti-Pornhub moral panic across social media after columnist Nick Kristof parroted anti-sex worker organization Exodus Cry’s claims that the adult giant peddles many videos “of children being assaulted.”

But facts don’t matter when it comes to feelings. Self-righteous indignation around “saving women” is deemed more important, even when sex-working women claim Exodus Cry’s crusade is destroying their income during the pandemic.

If culture wars are rooted in pervasive anxiety around some sort of unspeakable, repressed power coming to light, then free, open access to adult content is a very real destabilizing force for traditional American beliefs around sex and bodies.

In its most extreme, anti-porn hysteria makes the jump from mere disdain to open calls for violence against the adult industry and its sex workers. On far-right social media network Gab, right-wing Christian extremist groups celebrate Exodus Cry and its allies, promising to use extrajudicial means to bring MindGeek to justice, Vice notes. In one case, far-right women offered to patrol Los Angeles with baseball bats “looking for whores, pimps,” and trans people, all in the name of defending “women and children.”