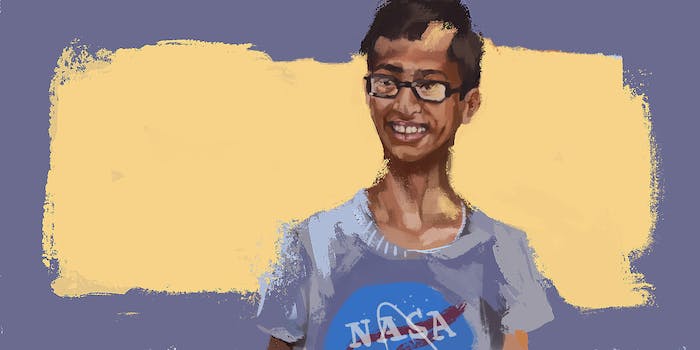 The science fair project heard ’round the world

Ahmed Mohamed, a freshman in Irving, Texas, certainly didn’t mean to create anything besides a clock when he assembled a mess of electronics in a box in September. Known to his MacArthur High School classmates as “Inventor Kid,” Mohamed had a knack for putting together electronics in his free time and wanted to show his engineering teacher what he’d figured out over the weekend.

But school authorities feared the worst, and things quickly spiraled out of hand. An English teacher said his clock looked like a bomb, confiscated it, and sent it to the principal’s office. The school called the police, who arrested Mohamed for possessing what they said was a “hoax bomb,” which is illegal in Texas. Eventually, police let him go, but his school suspended him for three days.

His story went viral and was met with almost universal outrage. “This is what happens when we screw something up,” one Irving Police officer wrote to his fellow officers.

From there, things started seriously looking up. He received words of support from Hillary Clinton, Facebook founder Mark Zuckerberg, and multiple employees at NASA, his dream employer. Topping it off, he got a personal invitation to visit President Obama at the White House (“IT WAS AMAZING,” he tweeted). Eventually, he even got his clock back from Irving Police.

IT WAS AMAZING, AND A HONOR MEETING #PRESIDENT #OBAMA!!! #YOY #THEWHITEHOUSE pic.twitter.com/OIuXjFVLZe

Still, he couldn’t go back to MacArthur. “I’m doing well in Qatar,” he told the Daily Dot, referring to his new home, where he relocated after accepting a scholarship to attend a prestigious program in Doha.

Though his family moved abroad, they don’t consider matters settled in America. In late November, the family sent a letter demanding a total of $15 million in damages from the city of Irving and its school district, as well as written apologies from the mayor, chief of police, and Irving ISD.