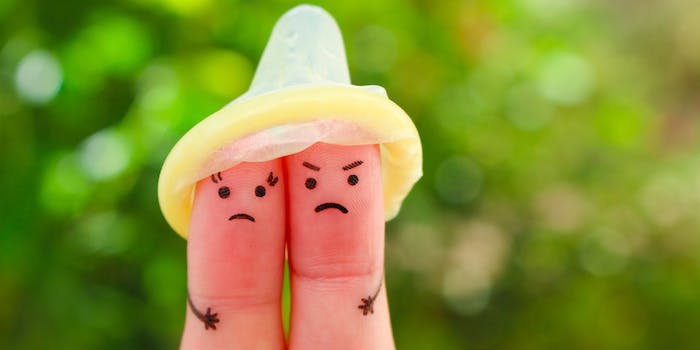 The abstinence-only sex ed agenda is only growing more dangerous under Trump.

Actual fact: Abstinence-only education is not real sex education, because you can’t teach a subject by refusing to tell your audience anything about its practical reality.

And yet, despite repeated demonstrations of its inefficacy, abstinence-only sex ed has taken hold in conservative states and schools nationwide. In fact, it stands as the Trump administration’s preferred form of “sex ed,” although you’ll most commonly see it cited as “sexual risk avoidance education” in White House parlance.

The real truth about abstinence-only education

Whatever you want to call it, abstinence-only sex ed correlates to higher teen pregnancy and sexually transmitted infection rates, and is an irresponsible recommendation from a public health standpoint. Feeding teens deliberately crafted inaccuracies like “condoms cause cancer,” as abstinence-oriented curricula sometimes do, would not seem to reduce the risks associated with sex: The SRAE rebrand feels pretty antithetical to the concept of education.

The answer to that question is not as straightforward as you may expect. According to the Guttmacher Institute’s most recent data, 24 states and the District of Columbia require that schools teach sex ed. 27 states and the District of Columbia stipulate that, when schools do teach sex ed, the curriculum must check specific boxes. In 13 states, that means medically accurate information (let that one sink in). In 26 states, the information needs to be age-appropriate. Eight states mandate that information taught cannot be racially or culturally biased. Two states say sex ed curriculum cannot promote religion.

Eighteen states, plus the District of Columbia, require sex educators to go over contraception, and 37 obligate instructors to address abstinence. Of those, 27 mandate that abstinence is “stressed.” Meanwhile, sex education in 18 states must frame sexual activity as appropriate only within marriage.

To pin down the exact number of states that require abstinence-only sex education, I asked Elizabeth Nash—senior states issues manager at the Guttmacher Institute—to unpack some of the nuances in the data. Nash recommended I look at states where abstinence is stressed or covered, and contraceptive education is not required. That leaves us with a total of 19 states, listed below (all of which stress abstinence, unless otherwise noted). But first, some background information.

What we’re talking about here are states that emphasize abstinence as the only means of avoiding pregnancy and STIs, if STIs get addressed in the program at all. As the Sexuality Information and Education Council of the United States demonstrates with this useful synopsis, abstinence-only programs do not always adhere to medical fact: Some states mandate only sound information be provided to students, while others use scare tactics and lies. For example, you can contract HIV by touching the skin of another person who has it; condoms are ineffective in guarding against HPV. (False and false.)

Some curricula may teach students about drug and alcohol use—part of “healthy decision-making”—and it promotes risky sexual behavior. Many will perpetuate gender narratives that paint women as prey responsible for fending off advances from inherently predatory men, and reject the idea of any sex that isn’t heterosexual and confined to a marital context. Many paint sex as an activity that actively degrades a person’s sense of self-worth and leaves them feeling wounded. This is especially true if that person happens to be a girl.

In short, premarital sex destroys futures, lives, and families, the abstinence-only line often goes. When we talk about “negative outcomes of teen sex,” “coercion avoidance,” “healthy decision-making,” and the dangers of sex before marriage—as we’re about to do—this is the type of sh*t we mean.

According to the Guttmacher Institute, Arizona does not mandate sex ed or HIV-specific instruction. However, where schools do provide it, the curricula must be age-appropriate. It must address the “negative outcomes of teen sex.” It also teaches students how to “avoid coercion.” This typically puts the onus on teen girls to keep themselves safe, rather than on a potential abuser.

When sex education is offered in Arkansas, it must cover the importance of sex as a marital activity only. Rather than offering information on condom use to avoid HIV transmission, Arkansas preaches abstinence. It also teaches coercion avoidance.

When provided, sex ed in Florida must be age appropriate. It must frame sex as a marital activity and emphasize the negative outcomes of teen sex. HIV avoidance is also framed in terms of abstinence, rather than condom use. Coercion avoidance skills are also on the menu.

Both sex education and HIV education are mandatory in Georgia, but don’t get too excited; the state curriculum stresses abstinence in both areas. Georgia also teaches students that sex is only for married people and emphasizes negative outcomes for teen sex.

Indiana does not require sex education, but it does require HIV education. (Perhaps because its former governor and our current vice president, Mike Pence, fostered an HIV epidemic in the state with his campaign to shutter Planned Parenthood?) Where sex ed is offered, however, it paints a negative picture of sex before marriage and promotes abstinence (not condoms) in HIV prevention.

Sex and HIV education are mandatory in Kentucky. Sex ed must cover the negative outcomes of teen sex—strange, in a state where sex ed doesn’t go over contraception or condom use.

Where offered, sex education must be age-appropriate and cannot promote a religious agenda. It must stress abstinence, both in terms of sexual activity and HIV prevention, and discourage premarital sex.

HIV education is mandatory, but sex ed isn’t. Where schools do teach the latter, however, it must be age-appropriate and—cagily enough—cannot be “medically inaccurate.” Michigan teaches against premarital sex and preaches the negative outcomes of teen sex, along with the importance of coercion avoidance and healthy decision making. Abstinence is the preferred method of HIV prevention in Michigan sex ed.

Sex and HIV education are mandatory, but abstinence is covered in both departments, as is “health decision-making.” Contraceptives and condoms, however, are left out of the state curriculum.

Not only does Mississippi mandate sex education, it requires localities to secure permission from the state health department before they can incorporate information on contraception and sexually transmitted infections into the curriculum. Mississippi sex ed must be age-appropriate, “shall not be medically inaccurate,” according to Guttmacher, and touts both the importance of sex within marriage only and the negative outcomes of teen sex. It covers coercion avoidance and frames abstinence as the sole means of HIV prevention.

Missouri mandates HIV education but not sex ed. Where sex ed does occur, it must be age appropriate, emphasize the importance of sex within marriage only, and outline the negative outcomes of teen sex. Coercion avoidance and healthy decision-making are both on the menu. But when it comes to preventing HIV, condoms are not. That’s an abstinence issue, according to Missouri.

Sex and HIV education are both mandatory in Montana. In both arenas, abstinence is covered—but because contraception isn’t, Montana makes this list.

North Dakota requires sex ed be taught in schools, and that the curriculum covers abstinence. Because it omits contraception, however, North Dakota defaults to “abstinence-only” state.

Ohio mandates both sex and HIV education in schools but emphasizes the importance of having sex only when you’re married alongside the negative outcomes for teenage copulation.

Oklahoma requires HIV education, but not sex ed. Where sex ed is taught, it must stress abstinence, while HIV education covers abstinence and does actually address condom use. But if you were beginning to feel optimistic, hold that thought: Per Guttmacher, “Mandated HIV education in Oklahoma teaches that among other behaviors that ‘homosexual activity’ is considered to be ‘responsible for contact with the AIDS virus.’”

Tennessee requires HIV education, but mandates sex ed only “if the pregnancy rate for 15-17 [year-old] women is at least 19.5 or higher,” according to Guttmacher. HIV education must be age appropriate. When it is taught, sex ed must discourage premarital sex, outline the negative outcomes of teen sex. The curriculum also includes coercion avoidance, healthy decision making, and family communication skills.

Texas does not mandate sex or HIV education, but where it occurs, the curriculum must be age-appropriate. Sex education must take a no-sex-before-marriage tack, warn students about the dangers of teen sex, and take a negative view of non-heterosexual orientations. It includes information on coercion avoidance, healthy decision making, and (notably) condom use in preventing HIV, although abstinence is still stressed.

Utah requires sex and HIV education that includes medically accurate information. But if a student raises their hand and asks a teacher a question about the curriculum, the teacher’s answer has to adhere to state law (which, remember, strikes contraception from the conversation). Sex ed in Utah must be culturally appropriate and unbiased. It must also discourage premarital sex and promote coercion avoidance, healthy decision-making, and family communication.

Wisconsin mandates HIV education but not sex education. Where schools do teach sex ed, they must stick to a curriculum that discourages sex before marriage.