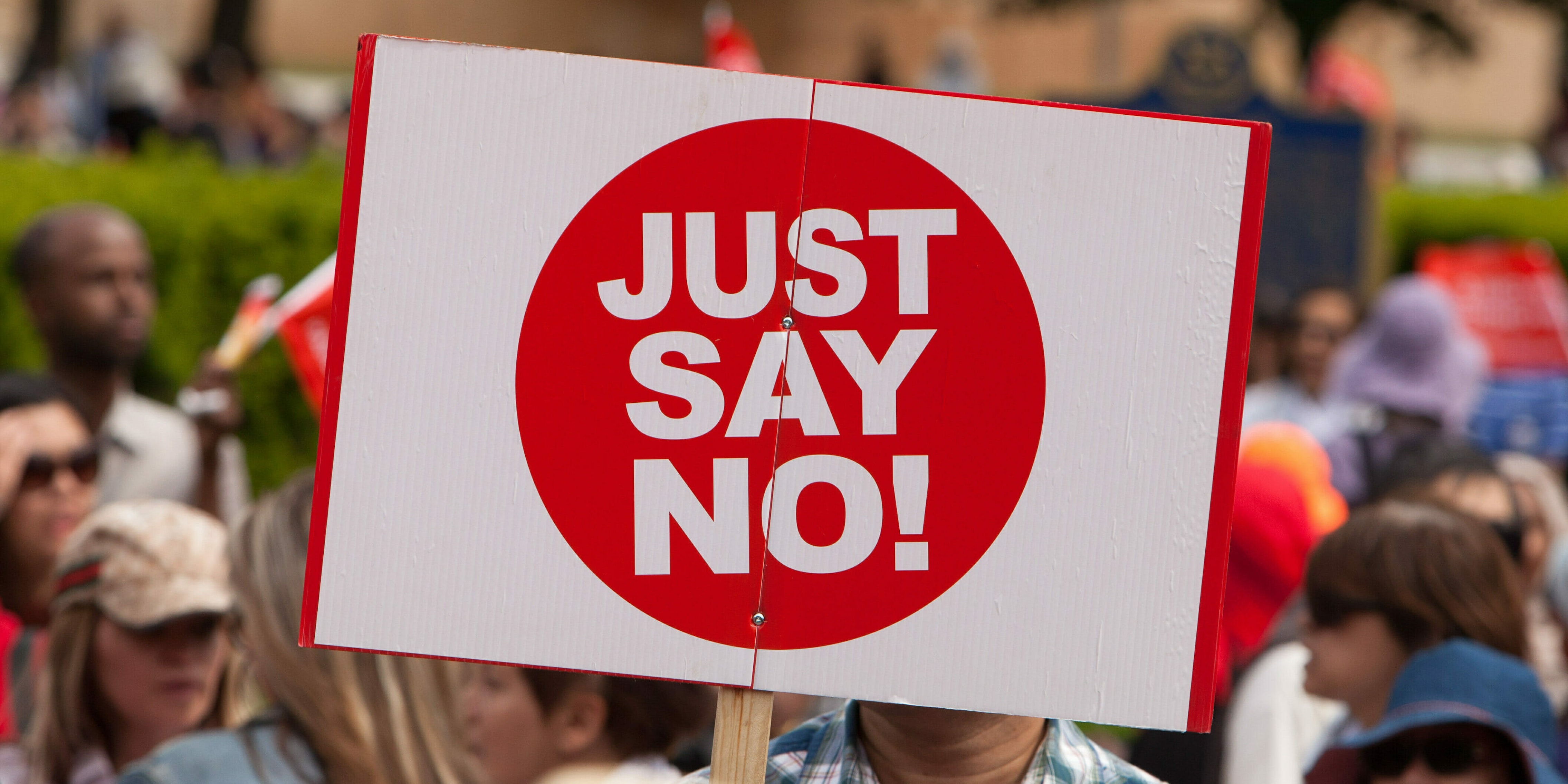 Not everyone will agree on what just constitutes abstinence—or its benefits.

Since Donald Trump took office, headlines about abstinence have surfaced in the news cycle more frequently than I, at least, would like. Despite a mountain of evidence to demonstrate that abstinence-only sex education is counterproductive (and we’ll get to that), the Trump administration has continued to tout it as the only acceptable curriculum for teaching young people about their bodies. What is abstinence? In this, the newly dawned age of abstinence, it’s worth knowing what the word means. I wish I could furnish a straightforward answer on that score, but unfortunately, the question deserves a much more nuanced response than a Merriam-Webster-ish phrase.

In short, abstinence means saying no to sex—whatever you might consider sex to be. And therein lies the complexity.

Abstinence vs. celibacy—what’s the difference?

“Wait wait wait,” I hear someone scoffing in the back. “Isn’t saying no to sex just celibacy? Are abstinence and celibacy just different names for the same thing?” No, but they overlap. A celibate person passes on sexual activity, usually because of personal convictions or their belief system. An abstinent person, meanwhile, does not have sexual intercourse—usually because, according to Dr. Laura McGuire, a consultant at the National Center for Equity and Agency, an overarching social or cultural force tells them not to.

How do we define sex?

Similarly, abstinence can seed confusion in those who practice it, because different people hold different ideas about what, exactly, constitutes sex. And that is where we run into problems.

“There’s no clear boundary on what ‘don’t have sex’ [means],” McGuire explains. On its own, abstinence is a perfectly reasonable personal choice. People should only be having sex if, when, and how they want to. But often—at least under this new, abstinence-only sex ed regime—young people don’t decide to abstain out of the blue. They might make that decision based on an obligation handed down from their school or from their church. Oftentimes, they do so without much information.

In the conservative, Christian climates where these programs amount to the only sex ed many students receive, “don’t have sex” implicitly means “don’t put a penis in a vagina.”

Does outercourse count as abstinence?

McGuire notes that there exist myriad ways to have sex without vaginal penetration. If abstinence holds that intercourse is a no-go, then outercourse—because it does not entail inserting a penis into a vagina, or any other orifice—should be fine, right?

What (if any) are the benefits of abstinence?

There’s absolutely nothing wrong with the personal decision not to have sex until such time as you feel ready. With that in mind, one benefit for abstinence—for some people—will be comfort with and control over their sexual experiences.

What worries me—and other opponents of abstinence-only sex ed—is when teens abstain because they’ve been threatened into doing so. Telling teens that their questions about sex don’t need answers because sex isn’t something they’ll be partaking in is like telling a child who sees flames for the first time, “Fires are dangerous and you should avoid them, therefore you don’t need to know how they start, spread, or what you can do to stop them.”

There’s nothing wrong with abstinence itself, but abstinence-only education holds few benefits. First of all, abstinence pledges seem made to be broken. Most people don’t stay virgins until marriage, regardless of the vow they took. Furthermore, HPV transmission and non-marital pregnancies occur at higher rates in purportedly abstinent populations than their sex-having counterparts. And yeah: If you’ve never been told about contraceptives, or if your teacher fed you such medical fallacies as “condoms cause cancer” in your “sexual risk avoidance class,” you probably won’t reach for a rubber. Granted, vaginal penetration isn’t the only way to contract an STI—but potentially risky unprotected anal and oral sex allow abstinent adolescents to stay within their self-imposed guidelines.

If  you’ve long been taught that sex is a “deep, dark, dangerous thing,” McGuire explains, natural sexual impulses bear an “emotional weight.” The long-held practice of layering guilt on sexual desire is one reason why so many people assume that their behaviors are out of control, abnormal, even a hallmark of an addiction.

Additionally, because they place the onus on women to avoid sexual violence, abstinence-only programs lend credence to actively damaging gender stereotypes. Girls get painted as reckless jezebels entrapping men into immoral behavior, simultaneously responsible for guarding their flowers from boys who, in these narratives, present as natural sexual aggressors. On top of bolstering rape culture, abstinence-only programs also erase the experiences of anyone who isn’t straight, cisgender, and able-bodied.

“Everything from … lesbian or gay or transgender people, how they have sex, to experiencing different kinds of sexual practices around sex toys and safety” are deleted from a narrative that defines sex as penis-in-vagina, she says. “I’ve never seen sex education in a mainstream school that talks about what is sex education and how do keep yourself physically and emotionally safe if you’re in a wheelchair, or if you have cerebral palsy.” Abstinence-only education, McGuire says, “[pretends] that millions of other people with different identities and physical abilities don’t exist.”