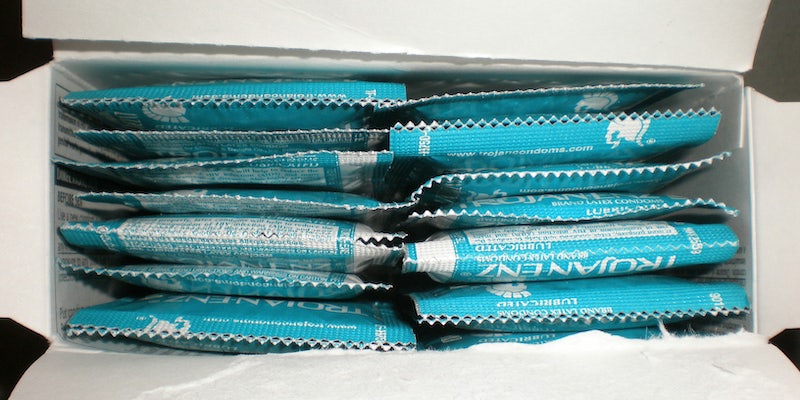 The complete, head-scratching history of the condom

Be grateful they're no longer made of tortoise shells.

The first time you saw one, a banana may have been in close proximity. They often come in different flavors, shapes, and sizes. They gather in colorful masses in boxes labeled “Free, take one.” They may have been the subject of many fumbling mid-makeout conversations. We’re talking about the prevailing birth control method known as the condom.

Unless your high school sex-ed course grossly failed you, you might think you know everything you need to know about penis hats. But a little history lesson never hurt anyone, especially if you’re researching the best condom options. When used consistently and effectively, condoms are up to 99 percent effective in blocking HIV transmission during penetrative sex—that is, after you get consent. Before you head off on your next adventure with a latex in hand, here’s a brief history of condoms, from their bizarre beginnings to their modern evolution.

When were condoms invented?

There’s no exact date for the official appearance of the first-ever willy hat. For most of their early history, condoms were used primarily as a method of birth control rather than as a preventative measure against sexually transmitted infections. The question of whether or not the ancient civilizations used condoms has been hotly debated, though it is known that civilizations in Egypt, Greece, and Rome used various methods of birth control to keep families small. You may have read the widespread internet claim that the earliest documented images of men wearing condoms were found in 15,000 B.C. in cave paintings in France, but this is a point of contention for many historians. Plus, there’s no hard (pardon the pun) evidence of ancient condoms, aside from a few cute cave drawings.

What were early condoms made out of?

In the early days, comfort or pleasure were, to say the least, not a priority when it came to the construction of penis sheaths. The earliest condoms, known as glans condoms, appeared in Asia in the 15th century. These were fitted to the tip of the penis and made from super comfy materials like animal horns and tortoise shells.

As with most revolutionary changes to contraceptives, something really terrible had to happen before there was a shift in protocol. The turning point for condom development was a particularly nasty syphilis outbreak in France at the turn of the 16th century. Prior to the spread of the “French disease,” Europeans had been using linens soaked in chemicals that were wrapped around the penis and tied with a ribbon. (Is this where the term “package” comes from? We cannot say for sure, but this sounds close enough.)

The first condoms that started to vaguely resemble the modern variety appeared during the Renaissance. These were constructed using animal membranes such as lamb, sheep, or pig intestines. Condoms made from lamb intestines are still widely used today, primarily by those with latex allergies. Obviously, these have evolved, but the concept is surprisingly the same—skin condoms worked best at capturing semen.

Ever wondered where the slang term “rubber” comes from? Charles Goodyear invented the rubber vulcanization process in the mid-1800s, and the first rubber condom was invented shortly after. The first rubber condoms were reusuable—and although this is surprisingly eco-friendly, it definitely wasn’t the most effective or sanitary. Rubber condoms were bad not only because they could be as thick as a bicycle tire, but because they had to be custom fit to just the tip of the penis (similar to the weird tortoiseshell condoms of yesteryear). So they, uh, flew off like the tiny rubbery hats they were. The majority of safe sex-havers preferred their animal skin condoms, which offered more sensitivity and were less likely to fall off during sex.

When did condoms become legal?

Just like with birth control, the Comstock laws prevented the distribution of condoms, birth control pills, abortion pills, sex toys, and other “obscene” preventative items in the U.S. Religous affiliates, moralists, and medical professionals alike opposed the condom, citing its immorality and reliability, as condoms could frequently tear, fall off, or be full of holes if not properly used.

By the late 19th century, other forms of birth control were becoming popular, like diaphragms and spermicides, both of which were primarily controlled by women. It wasn’t until the end of World War I that condoms became publically, legally available in the U.S. An American court overturned a conviction against Margaret Sanger, the iconic American birth control activist, allowing various forms of birth control to be advertised and sold. There were still state laws against distributing contraceptives, and advertisements were still illegal in most states, but for the first time ever, you could pick up condoms at the pharmacy.

Modern use and popularization

Latex was invented in 1920, forever revolutionizing the love glove game. Manufacturers hopped on the latex trend quickly. It was easier and cheaper to produce and provided a more satisfying experience for consumers. Animal skin condoms had finally met their match and soon became a favorite for a niche market in the U.S.

As a response to the AIDS epidemic in the U.S., the national conversation about HIV and AIDS prevention—and ultimately, condom use—exploded. The very first condom commercial aired in 1991, after the height of the AIDS crisis. For the first time, condoms were known primarily as a means to prevent STIs.