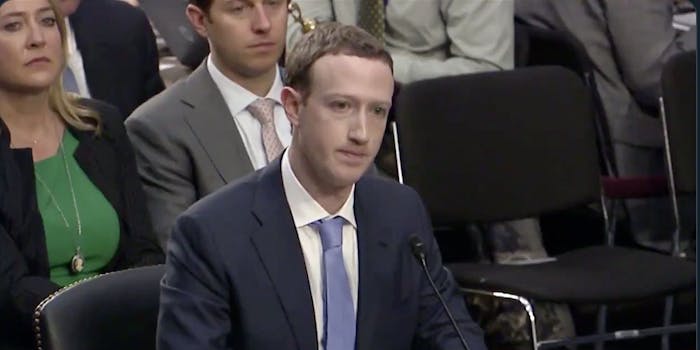 'At that hearing, I asked you specifically if Facebook uses audio...'

A Democratic lawmaker is calling Facebook CEO Mark Zuckerberg’s congressional testimony “at best, incomplete” following reports that the company used contractors to transcribe audio conversations made through the Messenger app.

In a letter to Zuckerberg, Sen. Gary Peters (D-MI) asked the Facebook founder to clarify statements made during his 2018 testimony about whether the company listens in on users.

Here’s my full exchange with Mr. Zuckerberg back in April 2018 ↓ https://t.co/kgosqVSC3E

“At that hearing, I asked you specifically if Facebook uses audio obtained from mobile devices to enrich personal information about its users,” Peters wrote. “Your emphatic answer was no.”

Zuckerberg specifically denied during the hearing though that Facebook did not turn on users’ microphones without their permission to gather information for ads.

“You’re talking about this conspiracy theory that gets passed around that we listen to what’s going on on your microphone and use that for ads,” Zuckerberg said at the time. “We don’t do that.”

In a statement to CNBC, Facebook argued that Zuckerberg’s comments were accurate given that its human contractors transcribed anonymized audio to strengthen Messenger’s automatic transcription tool, not to serve advertisements.

“Mark’s statements on this were true when he said them, and they remain true today. It has always been the case that Facebook only accesses your microphone if you have given our app permission and if you are actively using a specific feature that requires audio,” a Facebook spokesperson said. “It has also always been true that Facebook does not use your phone’s microphone to inform ads or to change what you see in News Feed.”

But Sen. Peters notes that users were not made aware that human transcribers would be reviewing their audio recordings, a practice that Facebook says it stopped one week before reports surfaced. The lawmaker is giving Zuckerberg until Aug. 28 to clarify if, how, and why Facebook collects user audio.

Facebook’s actions are currently being investigated by the Irish Data Protection Commission to see whether the company violated the EU’s data privacy rules.