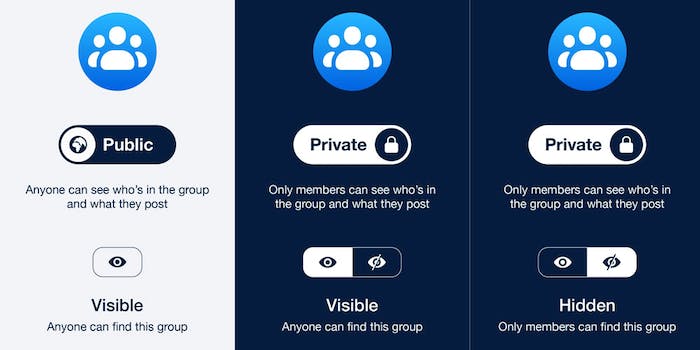 You can no longer label your Facebook groups as ‘secret’

The only options moving forward are to have either a 'public' or 'private' group.

Facebook announced upcoming changes to its “Groups” feature that will eliminate the ability to label them as “secret.”

In a blog post on Wednesday, Jordan Davis, product manager for Facebook Groups, said that the only options moving forward would be to either have a “public” or “private” group.

“By separating the privacy settings for posts and group membership from the overall discoverability of the group, it is easier for admins to understand and manage their group privacy settings, and also easier for members to know important information like who can find the group,” Davis said.

Facebook clarified that members and content in public groups will be viewable by any user, while private groups can only be seen by its members.

“We’re making this change because we’ve heard from people that they want more clarity about the privacy settings for their groups,” Davis added. “Having two privacy settings—public and private—will help make it clearer about who can find the group and see the members and posts that are part of it.”

The social media site noted that all content, regardless of privacy settings, will also be scanned by Facebook’s “proactive detection technology” to help “remove bad actors and bad content.”

“As content is flagged by our systems or reported by people, trained reviewers consider context and determine whether the content violates our Community Standards,” the company said in another blog post. “We then use these examples to train our technology to get better at finding and removing similar content.”

The planned changes come as Facebook attempts to rebrand itself as a pro-privacy company following countless privacy scandals. Davis said that the decision to simplify its groups came after working with global privacy experts and advocates.