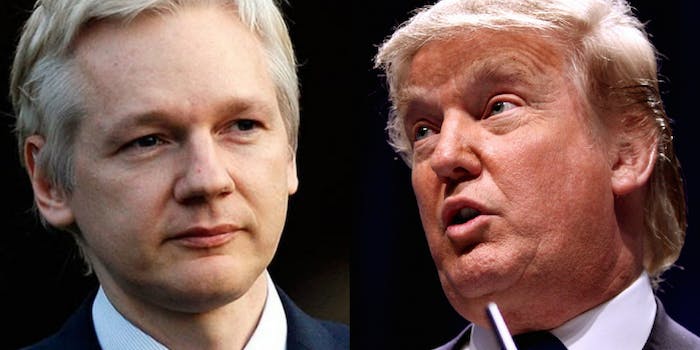 You know, if they exist.

WikiLeaks announced on Friday that it is willing to pay a substantial amount of money to anyone who sends them taped conversations between President Donald Trump and former FBI Director James Comey.

The organization sent out its reward offer on Twitter shortly after Trump tweeted an apparent threat to Comey on Friday morning. The offer stands as one of the most explicit examples of WikiLeaks pursuing potentially damaging information on Trump, who benefitted from the outlet’s publishing of stolen emails from the Democratic National Committee and John Podesta, Trump rival Hillary Clinton‘s Democratic challenger in the 2016 presidential election.

According to multiple U.S. intelligence agencies, WikiLeaks received the emails from Russian operatives as part of its efforts to influence the American election. WikiLeaks has denied colluding with Russia. The FBI is currently investigating those efforts, as well as potential ties between the Trump campaign and Russia.

WikiLeaks said it will pay someone $100,000 for the Trump tapes.

Trump said the former FBI director “better hope that there are no ‘tapes’ of our conversations” before Comey decided to speak to the media.

The possibility to taped conversations between the two set off a political firestorm on Friday—culminating with White House Press Secretary refusing to answer multiple questions from reporters on whether Trump has recorded conversations.

Asked directly whether there were “recording devices in the Oval Office or residence,” Spicer replied: “As I’ve said for the third time, there is nothing further to add on that.”

In addition to WikiLeaks, multiple members of Congress have requested that Trump release any recordings he may have.