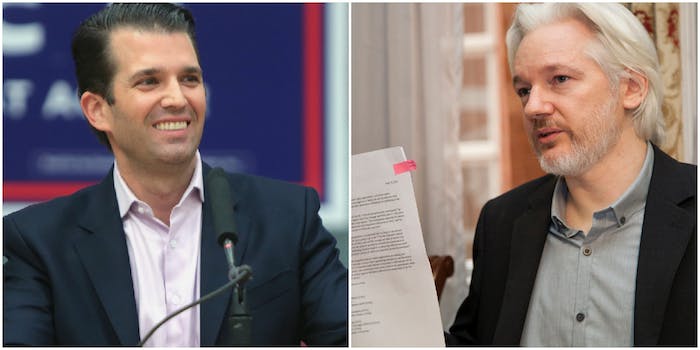 WikiLeaks tried to get Donald Trump Jr. to leak his father’s tax returns

There are a lot of other messages.

WikiLeaks reportedly asked for Donald Trump Jr. to leak “one or more” of his father’s tax returns right before the 2016 election, according to newly uncovered messages published by the Atlantic.

The Atlantic reports that Trump Jr. and WikiLeaks corresponded on multiple occasions in the run-up to the 2016 election through Twitter direct messages. Most of the responses appear to be WikiLeaks giving Trump Jr. information they knew regarding then-candidate Donald Trump‘s campaign, including an anti-Trump PAC with a website called PutinTrump.org that they had guessed the password to in order to access it, and even a request to have Trump appoint Julian Assange, the founder of WikiLeaks, an ambassador to the United States.

However, in late-October 2016, someone using the WikiLeaks Twitter account—possibly Assange himself—messaged Trump Jr. asking him to help out with an “unusual idea”—getting him to leak a few of his father’s tax returns to the organization.

“Hey Don. We have an unusual idea,” they wrote, according to the news outlet. “Leak us one or more of your father’s tax returns.”

WikiLeaks then laid out three reasons why Trump Jr. should do so, including the New York Times publishing a partial piece of one of his tax returns, the fact that more could come from a “biased source,” and that publishing them would “dramatically improve” the website’s “impartially” perception.

“That means that the vast amount of stuff that we are publishing on Clinton will have much higher impact, because it won’t be perceived as coming from a ‘pro-Trump’ ‘pro-Russia’ source,” WikiLeaks reportedly wrote.

Trump Jr. did not respond to WikiLeaks’ request for candidate Trump’s tax returns, according to the Atlantic. However, he did respond to several previous overtures from the organization.

It appears as though Trump Jr. shared at least some of his conversations with WikiLeaks with his father. As Wall Street Journal reporter Byron Tau noticed, Trump tweeted about WikiLeaks publishing Podesta’s emails just 15 minutes after the organization DM’d his son.

The messages between the organization and Trump Jr. were part of the cache of documents handed over to congressional investigators, according to the report, and WikiLeaks continued to try and speak with Trump Jr. until at least July 2017.

You can read more about the messages between Trump Jr. and Wikileaks here.