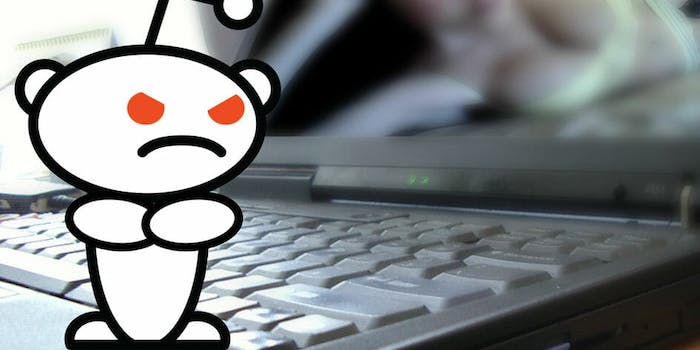 The dark side of Reddit’s GoneWild

Warning: This story might not be safe for some workplaces.

But that’s not always the case.

Seven months ago, a Reddit user called “IamTheFapMaster” recognized the bathroom of a girl who posted to r/gonewild as being in a University of Central Florida (UCF) dorm. Without her permission, redditors reposted her photos to a subreddit for UCF students (r/UCF), where she was identified by her peers. The girl deleted her photos, but they were still available for viewing on image-hosting site Imgur until she deleted her entire account.

She was outed in real life, her pictures downloaded and saved without her consent, likely to reemerge at inopportune times and even worse places on the internet.

And she’s not alone. The women of GW, as redditors call it, are an unfair punching bag for the rest of the site, like strippers or sex workers in real-life society. The users mock them for having low self-esteem, for being desperate, for being too concerned with their looks. They sneer at the men who comment, claiming they do so because they could never get a girlfriend or because they’re hopeless idiots. The humor subreddit r/funny often includes posts like “gonewild in a nutshell” and an unflattering animated GIF.

On the rest of Reddit, GoneWild is fair game for parody, mockery, slut-shaming, and even the breaking of the site’s own rules.

Reddit has long been known for its struggles with misogyny. Because the site prioritizes free speech, there’s a dark line often crossed into hate speech and sexism. Memes like Good Girl Gina and Good Girl College Liberal feature women getting naked and shutting up. A subreddit called r/creepshots, which included covert photos of young women, was only shuttered after it achieved national notoriety. TwoXChromosomes, a subreddit devoted to women and women’s issues, is routinely raided by men’s rights activists. The women there recently talked in a thread about how it benefits them to have a gender-neutral username on Reddit, because a female name is “like a target on your back.”

The act of outing a user’s real identity, or “doxxing,” is forbidden on Reddit, but users are selective about when and how it’s enforced.

When Gawker’s Adrian Chen revealed the identity of violentacrez, one of the site’s most well-known trolls and a moderators for shady subreddits like r/jailbait, it was seen as a massive attack on the freedom and anonymity that Reddit promises. Chen was labeled a villain, and Gawker was banned from Reddit.

But the aforementioned IamTheFapMaster and other redditors routinely “punish” women posting to GW by revealing their real names and sending their nude photos to teachers and family members. It’s easy to track via watchdog subreddit r/ShitRedditSays, which compiles every instance of misogyny, slut-shaming, and general douchebaggery the rest of Reddit dumps onto GW.

A redditor called sirloafalot summed it up best:

Reddit on the violentacrez doxxing: “I can’t believe a journalist took words that VA said in a public place for a number of years and put them together to find out who he was then interviewed him!!” Reddit anytime a woman posts their own nudes and then deletes their account because of creeping and doxxing: “Well, what did she expect?”

The role of “nonconsent” in doxxing

Doxxing the women of GW is also, more alarmingly, based in the fetishization of nonconsent. There are plenty of willing women on r/gonewild, but the fixation for outsiders is on getting the photos of a girl who clearly doesn’t want them seen anymore. The redditors involved want the photos of the girl who said “no.” And despite rules against such a thing, the moderators did not take action against those who chased off the UCF student.

Stephen Bruckert, who has been researching misogyny on Reddit for the past year as part of a lecture he gives at universities about Internet culture, has found that outside r/gonewild, the Reddit community is steeped in “slut-shaming,” which is defined on Wikipedia as “making a woman feel guilty or inferior for engaging in certain sexual behaviors that deviate from traditional, or orthodox, gender expectations.”

More frighteningly, slut-shaming has been linked to victim-blaming in cases of sexual assault and rape—saying women who dress or act in a certain manner are “asking for it,” the same way the girls of GW are blamed or told they “should have known better” when their photos are used without their consent. The blame is shifted to the victim, rather than the jerk who harassed her.

“The dark side of GoneWild’s supportive atmosphere is that it’s one of the few places on Reddit where women can participate as women without being sexually harassed, accused of being crazy or stupid, or worse,” Bruckert wrote to the Daily Dot. “Reddit is host to a huge amount of slut shaming, which is ironic considering whenever a woman posts a non-nude picture of herself on the rest of the site, ‘checking for gonewild’ is practically a Reddit tradition—there was even a novelty account called ’ChecksForGonewild.’”

He’s referring to times when a girl posts a non-nude photo of herself in another subreddit—maybe she wants to discuss comic books or share a funny sign at her school—and is immediately dismissed in favor of attempts to find her GW posts. When a woman posted a cosplay photo, for instance, redditors found her Facebook and spammed the thread with her private pictures. There was even a Google Chrome plugin created to turn whoever has posted to GW’s every post green so they could be easily identified. (It appears to have been deleted recently.)

This rush to connect nude photos to usernames stems from the false—but catchy—idea that “there are no girls on the Internet,” explained here by a 4chan user (click to expand):

“They’re the ones punishing you.”

Popular GoneWild girl Nina1987, a 26-year-old medical student, said the rest of Reddit’s attitude about GW is based in fear and anger of breaking the mainstream code or professionalism. If these redditors abstain from what they want to do because of “how the world works,” why should the GoneWild women get to have fun without consequences?

“When I first posted on GoneWild and my world didn’t come crumbling down, it was freeing. They don’t have that and I’m pretty sure they’re convinced that these girls’ lives are tumbling down like a stack of cards, just, like, boom—but it’s not like that. They’re scared. They’re mad at women because they don’t get what they want.”

Redditors, she said, feel posting to r/gonewild is the mark of a weak woman or a woman who is not worth their time because she wants attention. But Nina argues that no one posts on Reddit to be ignored. To the people telling her to be satisfied with attention in real life, she wants to know, “Why are you online then?”

“The men of Reddit want the Internet to be for boys, like, ‘Why are girls coming into my Internet?’” she said.

There’s also, she’s observed, a financial aspect. People can’t imagine someone sane would post to r/gonewild because the move is a gamble with his or her future. But if they believe only a damaged, desperate, insane person would post nude photos online, then why is the next move not to have sympathy but instead to deliberately hurt the person?

“Isn’t that a worse quality in a person?” Nina1987 said. “I’m so horrible for posting naked pictures online but you’re trying to destroy my life. You need a wake up call because that kind of destruction of someone else’s life is such a harsh treatment for nothing, an offense that you created in your mind, because you don’t have to look.”

Damned if you do, if you’re a woman

As a site, Reddit wants to have its cake and eat it too. It wants to exist simultaneously as a liberal haven for good, while also having a deeply rooted and celebrated sexist undercurrent.

In the case of the woman from UCF, Nina1987 said the danger is in the idea that a woman and her body is more “valuable” because she doesn’t want the attention. In other words, the photos she doesn’t want displayed and the lack of consent are what’s exciting.

It’s a can’t win situation: The pervasive idea is that as a female redditor you should only contribute to a conversation if you show your boobs, but once you do, you’re a pathetic attention whore. The only appropriate place for women on Reddit is where they’re naked and quiet, not trying to draw too much attention to themselves.

As Bruckert put it: “Redditors see GoneWild as women in their place.”