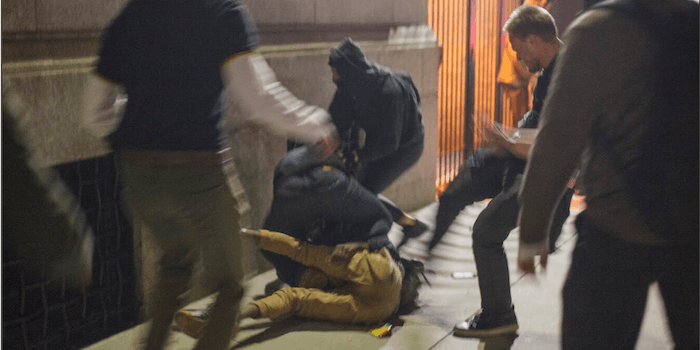 Following an event at the Metropolitan Republican Club in Manhattan Friday evening, a group of men associated with Gavin McInnes’ right-wing chauvinist group the Proud Boys turned violent, attacking three men who reportedly tried to remove one of their MAGA hats.

McInnes, who founded the Proud Boys back in 2016, has been a long-time advocate of violence. An intro to an episode of his CRTV show even features him decrying the “war on masculinity” and proclaiming that “fighting solves everything.” The altercation happened after McInnes had spoken at the club.

The Metropolitan Republican Club was vandalized the night before the event. Vandals broke windows, sprayed the anarchist symbol on the doors, and left a note, which read “Our attack is merely a beginning. We are not passive, we are not civil, and we will not apologize,” according to New York Daily News.

Documentary filmmaker and author Sandi Bachom took a video of Friday night’s altercation and posted it to YouTube. The video description  reads, “We followed Proud Boys after Gavin McInnis (sic) Republican Club event.” The Daily Dot reached out to Bachom for comment, but she declined, citing fears of retaliation.

“Police escort walked them down Park Ave,” the YouTube description continues. “Then a small group turned down 82nd Street. Someone tried to take one of their MAGA hats and this happened.”

The video is from far away and quickly dissolves into chaos, which makes it difficult to track what is happening through the short minute-and-a-half recording. The Proud Boys, mostly matching in simple trousers and black shirts, turn off down a quiet city street before something off-camera gets their attention. Men start taking off, sprinting down the sidewalk to catch up with the rest of the group.

The fighting begins while the person holding the camera, presumably Bachom, tries to get a better angle on the violence. Men, several sporting bright red MAGA hats, can be seen circling on the opposite side of the road while one shouts “Kick him! Kick this motherfucker.”

“About 1-2 blocks away a 30 (proud boys) V 3 (randoms) fight broke out,” Horse tweeted. “It ended with 30 proud boys pummeling a guy on the ground screaming ‘ARE YOU BRAVE NOW FAGGOT?!’ “

So followed the proud boys as they left the event. About 1-2 blocks away a 30 (proud boys) V 3 (randoms) fight broke out. It ended with 30 proud boys pummeling a guy on the ground screaming “ARE YOU BRAVE NOW FAGGOT?!” Going home now to file and edit the shots

Proud boys jumped on the train about 45 minutes ago. They were going to a bar in the east village. Didn’t follow them onto the train, so I’m guessing we might hear about more fights tonight.

“The Proud Boys even waited to do a group photo after the fights,” Horse posted a few hours after the chaos had subsided. “They were hyped the fuck up after that. Flashing their white power hand symbol before marching towards a downtown train.”

The Proud Boys even waited to do a group photo after the fights. They were hyped the fuck up after that. Flashing their white power hand symbol before marching towards a downtown train. pic.twitter.com/JP6jiM8Yud

The Daily Dot spoke with Horse about the fight. He said that though he couldn’t identify the three men attacked by the Proud Boys, he could confirm that it was “30 proud boys vs 3 people.” He said that according to the Proud Boys, the fight was started by “the uppity Antifa.” Antifa is a group that believes in aggressive, even violent reactions to far-right movements. Artist and writer Molly Crabapple also shared photos and videos, corroborating Horse’s claim that the fights involved three men versus a group of Proud Boys.

A video posted to Twitter by @leftkist shows the fighting from a much clearer position. When asked by several news organizations, @leftkist said the video came from the Proud Boy’s Facebook page.

According to Crabapple’s tweets, the three men attacked by the mob were arrested following the “fight.” Crabapple did not respond to the Daily Dot’s requests for comment.

It is uncertain if the Proud Boys or McInnes will see any repercussions following Friday’s violent altercation. A spokesperson for the NYPD told Gothamist that three people were arrested, but “they have ‘no reference to Proud Boys’ in any police reports.”

A tweet from Rebecca J. Kavanagh, a senior staff attorney at the Legal Aid Society in New York, confirms that the people arrested were not members of the Proud Boys.

Confirmed that the people arrested are anti-racist protestors and that they should be arraigned in Manhattan Criminal Court, 100 Centre Street, sometime on Saturday (court is up 9AM through 1AM Sunday morning).

“Confirmed that the people arrested are anti-racist protesters,” the tweet reads. “They should be arraigned in Manhattan Criminal Court, 100 Centre Street, sometime on Saturday.”