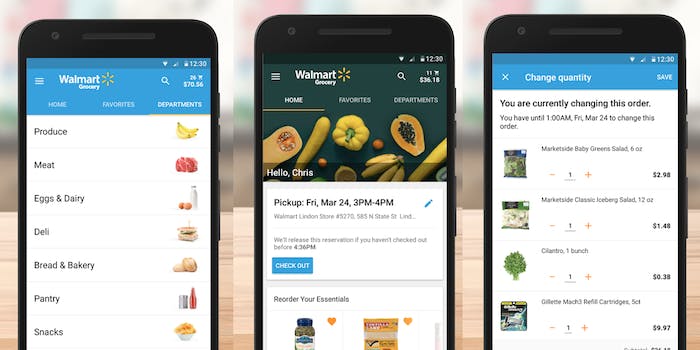 It's expanding across 100 metro areas by the end of the year.

Walmart announced it was getting into the grocery delivery business back in August, but the service only operates in six cities. By the end of the year though, Walmart plans to expand its same-day grocery delivery to more than 100 different cities across the country. If you’re curious to try it out, good news: There’s a way to use it for free.

While Walmart will normally charge a $9.95 delivery fee on orders that total a minimum of $30, if you use the code FRESHCAR you can try it for free. Walmart Grocery makes deliveries in as little as three hours from the time you put in the order.

To check if Walmart Grocery is available in your area, you can visit its website here. If it’s not available yet, don’t worry—it’s coming to more than 800 stores over the next few months. By the end of the year, it should be available to roughly 40 percent of the country’s households.

As we reported before, Walmart is using a mix of techniques to get food to your doorstep, including partnering with Uber. In some areas, it may use other crowdsourced delivery services or its own vehicles. In areas where delivery isn’t available, you can still use the site to order your groceries—you just have to pick it up in-store.

Walmart’s same-day grocery delivery service is an attempt to bring it up to speed with competitors such as Amazon-Whole Foods (which recently started a two-hour same-day delivery program), Postmates, Uber Eats, and Instacart. Its offering is priced competitively, and expanding quickly. However, other services such as Amazon Fresh and Postmate offer annual subscription options—$279 and $120, respectively—that could bring down the overall cost of same-day grocery delivery as long as it’s used regularly. Instacart typically charges between $6 and $8 per delivery.