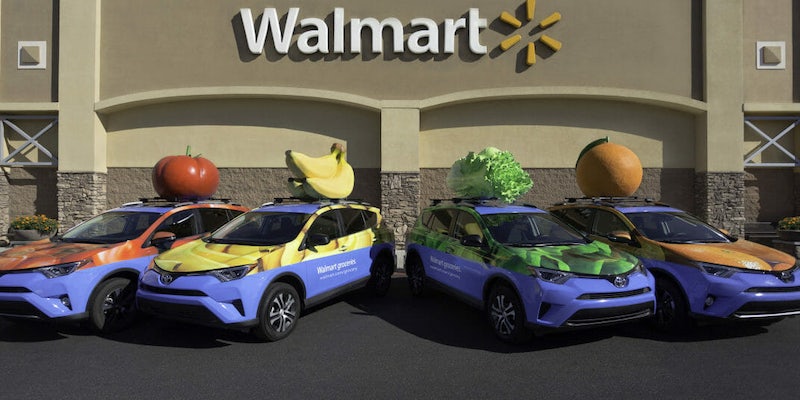 Uber is teaming up with Walmart for grocery deliveries

Tampa, Phoenix, Dallas, and Orlando residents can check it out.

In an attempt to keep up with competitors (and our own insatiable laziness), you can now get Walmart grocery deliveries—through Uber.

It works like this: Head to Walmart.com/Grocery on your phone or desktop. Then pick out the items you’d like to buy. Place them in your basket, pay, and select a time you’d like it delivered. From there, Walmart’s personal shoppers will gather your items and hail an Uber, which will then deliver your groceries. You have to buy at least $30 worth of groceries, and the delivery fee is $9.95.

Walmart first began testing grocery deliveries last year in two pilot markets, Phoenix and Tampa, Florida. Now it’s expanding this service to Dallas and Orlando, Florida. Walmart is still nailing down exactly how it wants to approach these deliveries. In some places, it’s using its own Walmart drivers and trucks. At other times, the company is partnering up with on-demand driving services such as Uber. When you place your order, TechCrunch notes, there’s no real way to tell if your food will come via Uber, or some other method.

If you live outside these four markets, you may still be able to use the Walmart Grocery site. While you can still order online, you’ll just have to head to a nearby Walmart location (900 are currently participating) to pick up your groceries.

In offering grocery deliveries, Walmart joins the likes of Google and brick-and-mortar grocery store chains such as Safeway. But Amazon, with its recent acquisition of Whole Foods, is likely the main competitor Walmart has to watch out for.