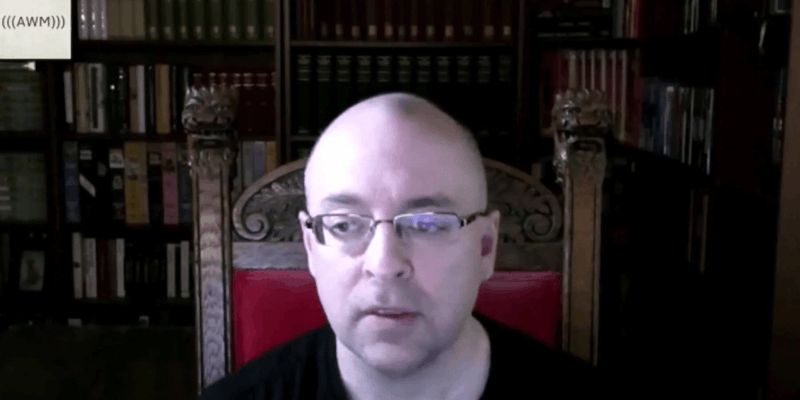 Theodore Beale could be described as the renaissance man of the far-right. He’s a multilingual science-fiction novelist, political commentator, publisher, video game developer, blogger, and a techno musician with a handful of Billboard Top 40 dance club singles under his belt.

Beale, better known to some by his pen name Vox Day (and to others as Teddy Spaghetti), has also been described as a white supremacist, misogynist, neo-Nazi, and the like. He maintains that he is a Christian nationalist and has denied being a bigot. He tells the Daily Dot that he publicly identifies as Native-American, and therefore considers the label “white supremacist” to be “offensive.”

Beale thrives online all the same.

He and his publishing company, Castalia House, have been found on many major and minor platforms, including Patreon, Twitter, YouTube, Spotify, Amazon, IMDb, iTunes, BitChute, Vimeo, Stripe, and IndieGoGo. You can buy his books at Walmart.

Some, like Amazon, have kicked him off, only to let him back on. He’s complained that IndieGoGo booted the campaign for his QAnon-based comic book Alt-Hero Q, but says he resolved the matter in the end. Twitter permanently banned him in 2017; it’s not clear why, and he initially claimed not to know why, surmising it was his memes satirizing author Mary Beard. A day after his account was suspended he implied it was due to “alleged code-of-conduct violations.” (Castalia House is still on the site, which it uses to promote its publications.)

But maybe it was because Beale’s history of offensiveness is long. He has praised racially motivated acts of terror and railed against multiracial societies. On Jan. 16, he wrote, “Import the third-worlders, then relax and enjoy the inevitable child rape that accompanies the descent into third-world society.”

Beale told the author John Brown in 2015 that Black men are “500 times more likely to possess a gene variant that is linked to violence and aggression than white American men.”

He also said that women shouldn’t have the right to vote because “they are significantly inclined to vote for whomever they would rather fuck,” and that society is harmed when women are educated beyond high school. He also has a penchant for picking fights; oddly enough, typically with people on his side of the political spectrum.

The Daily Dot asked Beale via email about his history of conflict, allegations of bigotry, and claims that his conduct may violate the terms of service of the platforms that host him. He responded with accusations. “Thank you for your admission that you are attempting to tortiously interfere with the contracts that govern the relationships with the various platforms you mention,” he wrote.

Beale ignored a follow-up inquiry. He did, however, post on YouTube within a matter of hours to reiterate his claims of tortious interference with contracts, and threaten to sue if he is de-platformed as a result of inquiries about his prior statements and whether he’s violated companies’ terms.

“The death star has been activated,” he said, later adding: “We can all look forward to the coming hit piece.”

The video is no longer available on his channel.

Yet Beale insists he isn’t worried about negative press. In December, after the Daily Dot sent inquiries to platforms that host him, he blogged about “another hit piece” that was coming. “It’s mildly amusing to observe the way they believe just one more slander will finally serve to discredit and disqualify me when the 10,000 previous slanders have failed,” he said.

Beale uses some of the platforms as moneymakers. The Patreon account for Castalia House, whose authors include the likes of Jack Posobiec and Mike Cernovich, prominent far-right figures in their own right, has nearly 1,700 patrons contributing a cumulative $6,800 per month, $82,000 annually.

The good times on Patreon may soon come to an end, however. On YouTube and his blog, Beale has referenced a recent, ongoing conflict with the company; neither answered questions about the nature of the dispute.

An Amazon spokesperson implied that Beale isn’t in violation of its policies and said it would remove his products if he were.

“As a bookseller, we believe that providing access to written speech is important, including books that some may find objectionable,” the spokesperson wrote. “We are mindful of a global history fraught with book censorship, and we do not take this lightly.”

YouTube said that it doesn’t consider off-platform conduct or content in enforcement actions, with a rare exception when someone is convicted of a crime related to their content on its platform. The Daily Dot did not find any evidence of Beale being accused or convicted of a crime.

It’s difficult to quantify the cumulative size of his audience across these platforms. His Darkstream YouTube channel has more than 33,000 subscribers; his Voxiversity channel 16,500. On Castalia House’s website, he claims his two blogs together receive 1.5 million pageviews monthly; on Amazon, he says that one blog alone gets 3 million views.

Beale has a long record of making objectionable and hateful public statements. He seems to thrive on the controversy that follows.

The list of people and organizations he’s done internet battle with is long. Beale even reportedly once called the police on a disabled man who trolled his blog.

The Science Fiction and Fantasy Writers of America Board voted to expel him in 2013, although he says “the full membership never voted on the matter.”

He even got under the skin of Game of Thrones author George R.R. Martin, who referred to the campaign as one of “neo-Nazis and rightwing reactionaries.” That year the Wall Street Journal described him as “the most despised man in science fiction.”

In 2012, Right Wing Watch reported that he’d written a column advocating a “whites only secessionist movement.”

Five years later on one of his blogs, Beale praised Norwegian mass murderer Anders Breivik’s “highly effective blow against the political machine,” and wrote that he could be considered a “hero.” Conceding that Breivik “did a terrible thing” by murdering 77 people, mostly children, Beale then argued that the children weren’t innocent, but “larval” politicians akin to Young Republicans or Hitler Youth.

“In any event, my expectation is that if the West, and Norway, survive the ongoing clash of civilizations, Breivik will be considered its first hero,” he writes.

He’s claimed that the Christchurch, New Zealand and Parkland mass shootings were false flags. Beale has written that Jews are the most racist people on Earth. He’s referred to Trayvon Martin as a “No-Limit N***a.” He’s also blamed women for being raped and murdered and claimed that so few Black women supporting Trump proves that “the primary political problem in the USA is not feminism, it is ethnicity.”

These and other such statements have led many to label him a racist, misogynist, bigot, and identify him as a member of the so-called “alt-right,” a loose-knit group known for championing bigoted, pro-white views. The American Defamation League writes, “Beale is best known in alt-right circles for his online blog ‘Vox Popoli’ (Voice of the People) where he posts misogynistic, white supremacist diatribes.”

In spite of all this, Beale denies being bigoted, referring to accusations that he’s racist—made by the likes of conservative pundit Ben Shapiro—as “that old libel.”

Beale has written that journalists are “the enemy of the people” and opined, “The God-Emperor should take a page from the People’s Republic of China and simply start arresting them en masse.” (God-Emperor is his pet name for President Donald Trump.) He urges his followers to never speak to media. In the YouTube live stream, Beale conceded that the fact that he responded to the Daily Dot was something of a surprise.

As much as Beale detests the press, he apparently loves a feud. Many naturally shrink from their critics, but not him. He seems to relish conflict. Curiously, many, though not all, of his targets are people some would naturally assume he’d want as allies, rather than enemies. Unfortunately for him, his opponents typically tire of his antics long before he does, and resume ignoring his existence.

He’s also had a longtime row with successful sci-fi author John Scalzi, whom Beale calls “McRapey,” a false accusation saying that Scalzi confessed to being a rapist in a satirical essay he wrote in 2012.

Beale once published a book with an uncannily similar title, cover, and author name to Scalzi’s The Collapsing Empire, even going so far as to drop The Corroding Empire one day before Scalzi’s book. This move got Castalia House temporarily booted from Amazon.

Amazon has taken down all books from Castalia House, including my Dragon Award nominated novel NO GODS, ONLY DAIMONS and HAMMER OF THE WITCHES, and are withholding all royalties.#PulpRev and #Superversive, take note. Build your platforms.

Far-right YouTuber Nick Fuentes, whom he calls “Nickles” (he loves nicknames), is one of Beale’s more recently cultivated enemies.

Beale and Fuentes initially seemed to have the makings of a bromance. Last September, Fuentes said he’d be willing to have Beale on his show, adding, “I think he’s pretty smart. He’s got a lot of good takes.”

Alas, a perfect pairing was not to be. It’s not clear how the relationship soured, but it must’ve been sometime before the song “F Nick Fuentes” was uploaded in November. The song, which he says he did not record and he has never even heard, samples audio from a Beale live stream and attacks Fuentes.

True to form, Beale wasn’t willing to let a minute-and-a-half of such timeless lyrics as “Nicky titty baby” be his last word on the subject.

In December, Beale wrote that Fuentes is “a pathetic little snake” because he refused to debate and described him as “boring and slow,” “irrelevant,” a “never was” who has “all these like just stupid projects that don’t go anywhere.”

Since then, Fuentes, like others before him, appears to have decided that Beale’s not worth the effort. About his false and defamatory claims against him, Scalzi wrote in 2014, “Beale escapes punishment here because he’s failed to be important enough to be harmful.”

For all his bluster, Beale comes across as desperate for someone to pay attention to him. Yet some believe that his rhetoric has the potential to cause harm. It’s also arguable that Beale has violated platforms’ terms of service that prohibit hate speech.

Most companies, like YouTube, only consider the content on their platform. But some, like Patreon, maintain terms that allow them to consider users’ conduct off the platform. He does appear careful about keeping the worst of his statements on his blogs, perhaps to avoid getting kicked off the platforms. His Amazon author bio is an exception; it links to recent blog posts.

Internet companies have made a show of purging racists and bigots from their platforms. Why Beale continues to be hosted is a question that deserves answering.

Update 7:23am CT, Jan. 24: This story has been updated to more accurately reflect Beale’s feud with IndieGogo, and that he publicly identifies as Native-American.

Correction: Beale says he was expelled by the board of the Science Fiction and Fantasy Writers of America in 2013, and that he remains a member of the organization because the full membership did not vote on the matter. Additionally, the song “F Nick Fuentes” samples Beale’s voice, but he says he was uninvolved in creating it.