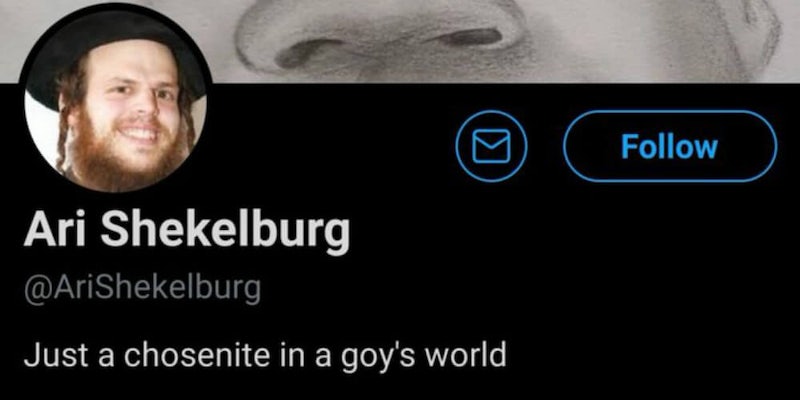 'These fake accounts are on a mission to do some serious damage between Black and Jewish communities.'

After a string of recent anti-Semitic attacks in the U.S., far-right trolls are creating fake Twitter accounts to try and divide the Black and Jewish communities.

People who belong to the communities are calling for users to report and block fake accounts.

“These fake accounts are on a mission to do some serious damage between Black and Jewish communities. Feeding on a whiff of tension,” Lara ‘Challah, who is Black and Jewish, tweeted.

“As a fellow Jew who was frightened by the string of anti-Semitic attacks, I am frightened” the account tweeted. “[N-words] were supposed to be on our side. Now we have lost control of them.”

According to Haaretz, “Goldschmidt’s” tweet is the “most prominent and widely circulated” one from a fake Jewish account.

These fake accounts are on a mission to do some serious damage between Black and Jewish communities. Feeding on a whiff of tension.
Report, block and always check the TLs/followers of new accounts before engaging with them. pic.twitter.com/R9EkO46QRK

Jane Godley, a British comedian, tweeted that trolls were using a photo of her for the account’s avatar.

“This far right 4chan account troll group is using my image and trying to get my account cancelled by mass tweeting – it’s hurtful and anti Semitic,” Godley wrote.

This far right 4chan account troll group is using my image and trying to get my account cancelled by mass tweeting – it’s hurtful and anti Semitic pic.twitter.com/d7Unld1uuJ

Another screenshot of a tweet written by user “Ari Shekelburg” calls on fellow Jews to “arm” themselves “against the brown menace.” The avatar is using a photo of a man in a Jewish cap.

Ohhhh ok. Now i get it. pic.twitter.com/SofjALO2OR

None of the accounts in question were available when the Daily Dot ran a search for them on Saturday.

Writer Elad Nehorai used their platform to spread awareness about the accounts and conversations happening on 4Chan.

“A 4chan thread was started inspired by my recent article that, among many other vile things, discusses messing with Jews and black people on social media,” Nehorai wrote. “The fact that you’re seeing fake Jewish accounts stoking racism after an attack is not a coincidence.”

Nehorai included screenshots taken from 4Chan, in which users are discussing “breaking the Black and Jewish alliance,” “inflaming these passions,” and “stirring the hornet’s nest” by posting anti-semitic content “on Black Twitter.”

Some examples of what I mean.

People underestimate the power of 4chan, but it is a radicalization breeding ground: it concentrates “lone wolves” allowing them to coordinate.

So the fact that you’re seeing fake Jewish accounts stoking racism after an attack is not a coincidence. pic.twitter.com/TBXVUbGhrA

The campaign doesn’t just extend to Twitter or 4Chan.

Not only does the campaign aim to pit the Black and Jewish communities against each other, but it also contributes to the erasure of Black and brown Jews, as one user pointed out.

“Hey, I know there’s a lot of tension between Jewish and black gentile communities right now, but we need to steer clear of lumping all African Americans in the ‘non-Jew’ category. It erases black Jews,” Twitter user @CaliCh33sehead explained.

At the beginning of the month, two women shoved a Jewish man to the ground after he tried to record the verbal anti-Semitic abuse they were hurling at him. The perpetrators in two of the attacks were Black, which is seemingly what the campaign is trying to exploit.