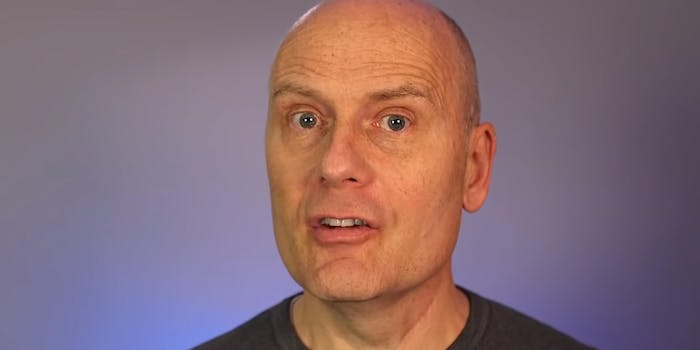 Just this morning, Stefan Molyneux was complaining on YouTube about how, because of his views, he was becoming downright unemployable. Saying leftists had hijacked his Wikipedia to highlight his far-right views, Molyneux said he couldn’t apply for a job, because prospective employers would Google him, and the process would instantly end.

Now, he’s without a newsletter host.

Mailchimp announced today it would no longer let Molyneux use its service to send his newsletter.

Thank you for bringing this to our attention. We’ve terminated this account.

Molyneux is part of a web of far-right nationalists who used social media to rise to prominence and push white nationalist and racist views, accumulating views and likes for their content.

He is an open men’s right’s activist, pushes Islamophobic ideas, and is a proud proponent of racist science. Those are things Molyneux is annoyed that prospective employers might see.

And though he still has a flourishing YouTube and Twitter presence, he no longer has Mailchimp, which received praise for kicking him off.

Thank you for this!!

Thank you! My firm uses MailChimp, and we were about to start looking elsewhere.

In his YouTube video today, Molyneux declared 2020 the last stand for his ideas.

He may have not realized how right he was.