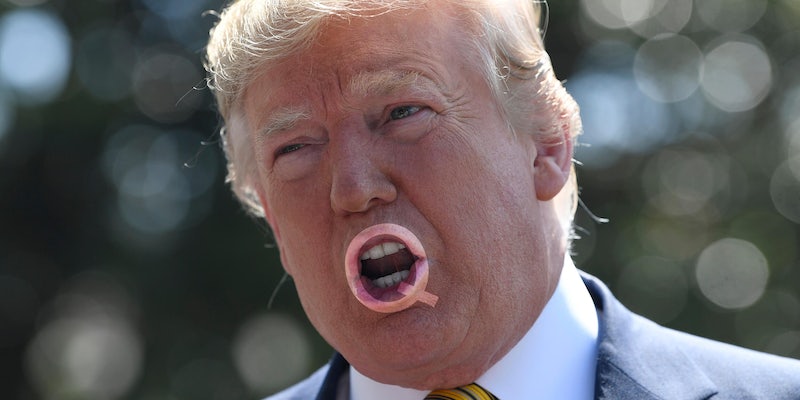 Trump has been tweeting posts that dance around the QAnon phenomenon recently. What does that say?

When President Donald Trump spent part of his Christmas vacation retweeting QAnon accounts and long lists of other Trump-supporting Twitter users (so-called “Trump trains”), the news was reported by nearly every major outlet in the country.

But dedicated observers of both Trump’s Twitter feed and the conspiracy theory community weren’t surprised. While the president’s boosting of random Twitter accounts and Q-pushing conspiracy believers might have been jarring, it was really the continuation of a phenomenon that started just weeks after Q first emerged from the swamps of 4chan.

Trump’s relationship to QAnon has been the subject of endless speculation by both skeptics and believers in the conspiracy. Q believers spend hours upon hours analyzing Trump’s hand gestures, pointing, and typos, seeing clues that the president is signaling them.

They also make endless demands that members of the media directly ask Trump about QAnon. Skeptics point out that the president has never mentioned QAnon, has little-to-no computer literacy, and that members of his administration have denounced it—most recently, campaign official Jessie Jane Duff, who derided it as “bizarre nonsense.”

But none of this proves or disproves that Trump knows what QAnon is. The White House didn’t respond to questions from the Daily Dot, so that leaves Trump’s retweets as the only affirmative statement the administration has ever made about QAnon. What do they tell us? Is Trump actually shouting out a conspiracy theory with numerous crimes committed in its name? Or is the QAnon content incidental in tweets that merely shower praise on the president’s favorite person?

According to data compiled by Media Matters, Trump “has amplified tweets from supporters of the QAnon conspiracy theory at least 72 times via at least 58 individual accounts.”

Many of these came in the president’s retweet spree around Christmas. But Trump’s first encounter with a Q-adjacent account came long before then, in November 2017. That’s when Trump retweeted an account called @MAGAPILL, which bills itself as the creator of “President Donald J. Trump’s Accomplishment List.”

It was that list that Trump retweeted, and though @MAGAPILL had been sharing Q content since before then, it wasn’t immediately obvious that the two were related.

Answer: Trick question. He already has.

On Nov. 25, 2017 Trump quote tweeted @MAGAPILL, which included a link to their website. The site has been promoting Q-Anon since before Trump's quote tweet. pic.twitter.com/q1G1YXbPr5

The next two QAnon accounts Trump retweeted, about a year later, were @The_Trump_Train and @WyattEarpLA, both prolific sharers of conspiracy material. Again, neither of the tweets Trump shared had any QAnon connection. Both accounts are long gone from Twitter. It wasn’t until Trump’s fifth retweet of a Q account that there was any obvious connection, when Trump shared a post from @vmbb12, whose icon was and still is a flaming Q wearing a MAGA hat.

Trump retweeted a Qanon account (@vmbb12) whose avatar is Q with a MAGA hat. I’d tell you more about this account but it has me blocked, even though we’ve never interacted. pic.twitter.com/Uhl0R2cOts

But is this proof Trump was signal-boosting Q? Or that he just appreciated the tweet, imploring Fox News to return one of its hosts from a suspension?

It wasn’t clear then, or now. After that, Trump shared a now-deleted video mocking the TSA that had been shared by a number of QAnon-pushing accounts. Then in May, he shared tweets by over half-a-dozen Q promoting accounts. Many of these were major names in the Q world, including @DeepStateExpose, who has over 293,000 followers and bills himself in his bio as a “Q researcher;” and conspiracy theorist Lisa Mei Crowley; with well over 150,000 followers.

Big day for the murderous death cult known as Qanon.

This is one of the biggest Q accounts.

But they refuse too and they won't, until a few more people get killed by these nutcases. pic.twitter.com/uEaQzYjgOS

Like the others, according to the tweets themselves (and screenshots of deleted tweets), there was no Q content in anything Trump shared—even if the accounts had Q iconography all over them.

This brings up the very reasonable question of “does anyone vet these accounts?”

We don’t much about how tweets get in front of the president, though we do know that the White House prints out at least some complimentary tweets and gives them to Trump to read (and sometimes autograph.) But given the administration’s  serious problems with vetting personnel, it’s a reasonable assumption that there’s little effort to police what the president sees on his phone. There’s also no indication Trump (or anyone) is looking at the profiles of the people who send these tweets to see what else they’ve said.

It’s also important to remember that a large portion of Trump’s time on Twitter has been spent retweeting other peoples’ praise of himself, usually by using an older retweet format, one that put quotation marks around the tweets, adding “thanks” or “so true.”

According to the Trump Twitter Archive website, one random day, March 28, 2013; found Trump shared compliments nearly 60 times. Other days were similiar, with dozens of random tweets getting spotlighted by the future president—building himself a fan base and a new brand in the process.

Then there are the other bits of Twitter chaff that earned his approval, such as a quote from Benito Mussolini posted by @IlDuce2016, a fake account made by Slate writer Ashley Feinberg, or when he tweeted a bogus “black crime” statistics meme likely created by a neo-Nazi, or the fake Ronald Reagan quote he shared back in July.

Much of Trump’s tweeting, then, is just stuff Trump likes, be it a nice thing someone said about him or a quote he approves of.

That’s how he’s used Twitter since he first got on it as a way to praise people who praise him. Nowadays, a number of his supporters are Q fans. So that’s what he sees in his mentions, which he’s been known to browse.

Sure enough, a deep dive into the Trump-shared tweets from Q-connected accounts were just that. Many were simply saying nice things about him such as “best president ever” and “down to earth, nice guy.”

Trump this morning quote tweeted the same semi-big QAnon account he quote tweeted last month, along with retweeting another account that has promoted QAnon content. pic.twitter.com/vbTd2uMOLj

The pattern (if it can be called that) is clear: Trump retweets an unpredictable assortment of Twitter characters, some of which are real and very popular, and others that are small and possibly bots.

A few of these are connected to QAnon through either other posts or the use of Q iconography. But at no point does Trump ever mention it himself. That’s not to say he doesn’t believe it, and believers in Q would say that he can’t publicly reveal the details because it’s all so secret.

He has come extremely close. In December, Trump retweeted “Tracy Beanz,” one of the Q believers most responsible for bringing the movement from a few posts on 4chan to mass popularity in the conspiracy community. That same month, Trump tweeted something that directly referenced QAnon.

But it wasn’t something that was about the conspiracy, merely a tweet complementary of Melania Trump that had QAnon as one of its many hashtags.

Through it all, Trump continued to hold off on directly speaking about the QAnon conspiracy, either because he was asked to, or because he doesn’t know what it is. Even the retweet spree just after Christmas, involving over 20 tweets made by accounts that had pushed Q content, didn’t have any overt mentions of the conspiracy, merely a few hashtags that would mean nothing to the uninitiated. Many of these accounts have already been suspended.

Since the New Year, Trump’s retweeting of random accounts has cooled off.

What does that leave the observer with?

Yes, Trump shared material from dozens of accounts that have also promoted a violent and destructive conspiracy theory. But none of that material has been about the conspiracy theory, and little of it even made a direct reference to it.

At no point in either his Christmas spree or after did the president give any indication that he knows what QAnon is. It’s possible someone on his staff asked him not to, and it’s also possible that he simply doesn’t know what it is.

It’s also is possible, given Trump’s well-known narcissism, that someone did brief him on what the conspiracy was about. One can imagine Trump being told that a swath of people think he’s secretly fighting deep-state Democratic pedophiles and him nodding in agreement, thinking, “Yes, I am.”

Why wouldn’t he retweet people who believe that?