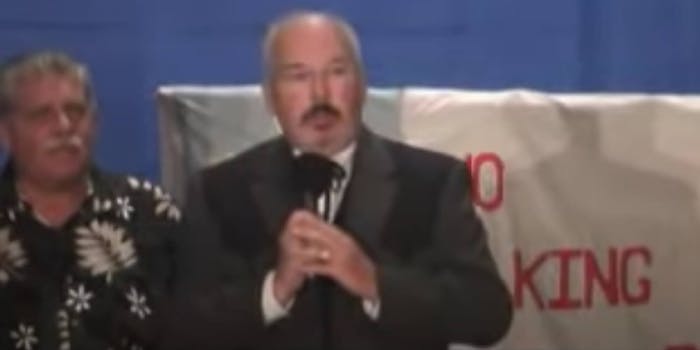 Facebook users are sharing the video as if it pertains to the ongoing coronavirus pandemic.

Facebook users are sharing a video that claims to expose the government plans to forcibly round-up unvaccinated Oklahomans.

According to Snopes, Facebook users have widely shared this video, even writing “Heads up Oklahoma.” Even though the video has been around since at least 2009, users began sharing it in mid-May as if it pertains to the ongoing coronavirus pandemic.

In the video, Greg Evensen, a man claiming to be a former state trooper, says the government is planning to microchip citizens via permanent metal bracelets. The chips will allegedly show if they received their vaccines or not.

“Now this is one of several plans. It has not yet seen the light of day, but it is there. It’s in readiness,” Evensen says, speaking into a microphone. “I assure you, those plans are in place.”

Those who are unvaccinated, Evensen claims, will be shipped off to detention camps via buses.

“There are plans ready to be implemented that include roadblocks and chokepoints,” Evensen states, claiming he received the information from state troopers across the country.

The video was created in 2009 during the H1N1 swine flu pandemic, so Evensen is presumably referencing the H1N1 influenza virus vaccine. Despite the video even starting off with a woman asking Evensen a question about the swine flu, some believe the video is about the current pandemic.

As Snopes points out, the video plays on two conspiracy theories. Some believe the Federal Emergency Management Agency (FEMA) has camps ready to detain Americans en masse. The other more mainstream theory claims vaccines are harmful, touted by people known as anti-vaxxers.

There is currently no vaccine for COVID-19. Several vaccines are currently in the works, and researchers suggest the earliest one could be ready for mass production is by late fall or early winter. (It usually takes several years to develop a vaccine.)