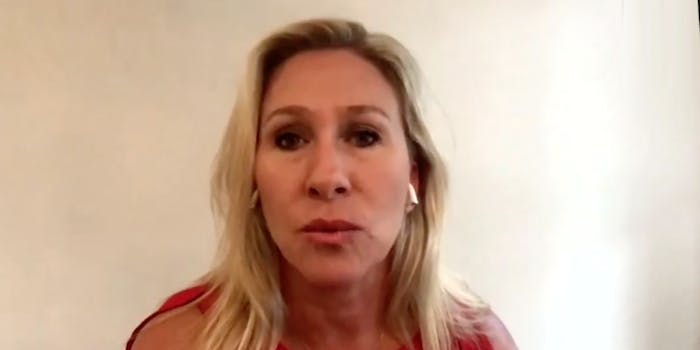 In a series of recently uncovered Facebook posts by Media Matters, Greene revealed her belief in a debunked conspiracy theory alleging that video posted to the dark web showed Clinton and her former aide Huma Abedin drinking the blood of a child.

The conspiracy theory, known officially as “Frazzledrip,” was created by the notorious fake news site YourNewsWire. Despite being totally discredited, the false claim remains popular among followers of QAnon and the Pizzagate conspiracy.

As reported by CNN, Greene also liked a Facebook comment in 2019 that called for “a bullet to the head” for House Speaker Nancy Pelosi. Greene liked similar comments that called for executing “deep state” FBI agents deemed to be opposed to former President Donald Trump as well.

Greene released a statement on Facebook in response to the discovery in which she appeared to shift the blame to people who allegedly manage her page.

Greene is facing stiff opposition in Congress already over her support for deranged conspiracies as well as her role in promoting false election fraud claims that led to the riot at the Capitol this month.

The congresswoman also recently made headlines after it was revealed that she also expressed belief in the conspiracy theory that the tragic Sandy Hook shooting was orchestrated by the government.