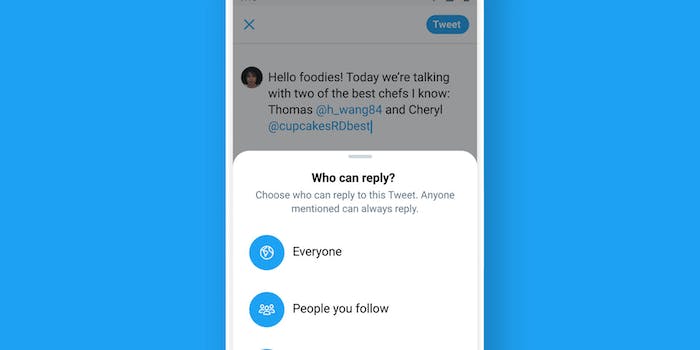 Courts have ruled that politicians blocking critical users on Twitter audience is unconstitutional.

Twitter on Wednesday said it was testing a new feature that would allow users to limit who can reply to their tweets, a move that the American Civil Liberties Union (ACLU) says would have an impact on politicians using the platform.

The feature is being tested with a small group of people, Twitter said, and would essentially allow users to choose exactly who can reply to the tweet: everyone, people they follow, or a specific group of people.

People will still be able to see the tweet, quote retweet it, and retweet it, but the reply button would be grayed out.

While the move may help curb some issues, the ACLU pointed out the impact it could have on politicians using the platform.

“As a general matter, Twitter’s investment in user controls is a good thing. But public officials would be violating the First Amendment if they were to use this tool to block speakers on any accounts they’ve opened up for public conversation in their roles as government actors,” Vera Eidelman, staff attorney with the ACLU’s Speech, Privacy, and Technology Project, reportedly said in a statement. “Nor should public officials use this tool to decide who can, or can’t, reply to accounts they have opened up for requests for government assistance, which may be on the rise due to COVID-19.”

Politicians using the feature to limit constituents from replying to them could conceivably be similar to blocking a user—which courts have found violates users’ First Amendment rights.

Courts have ruled that because politicians use their social media accounts as a way to disseminate information, it is a public forum.

President Donald Trump has been attacked for blocking critics on Twitter and Rep. Alexandria Ocasio-Cortez (D-N.Y.) apologized for blocking a critical Twitter user who sued her the same day the United States Court of Appeals for the Second Circuit ruled against Trump.

More recently, the Knight First Amendment Institute at Columbia University—which brought the lawsuit against Trump—reminded Sen. John Cornyn (R-Tx.) that he couldn’t block a user who criticized him for tweeting a picture of him with a Corona beer.