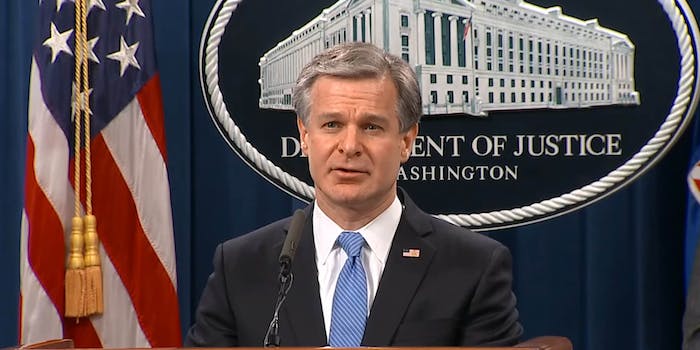 Apple said claims they weren't cooperative were 'an excuse to weaken encryption.'

Apple is pushing back hard at FBI Director Christopher Wray and Attorney General William Barr after the two officials spent Monday bashing the company for refusing to unlock an iPhone belonging to the Pensacola Naval Air Station shooter.

Wray and Barr announced on Monday that law enforcement was able to unlock the iPhone belonging to Mohammed Saeed Alshamrani after months of trying. Apple refused to do so for them when it was asked earlier in the year by Barr and President Donald Trump.

The disagreement was a flashpoint for the ongoing dispute about the government having a backdoor into encryption on devices and echoed a dispute between the company and the government following the 2015 San Bernadino attack.

Amid those calls from Wray and Trump, Apple insisted they were cooperating and said it turned over “many gigabytes of information” as part of law enforcement’s investigation.

However, Wray disputed that, saying on Monday that they received “no help from Apple.”

In response, Apple said the claims that they didn’t help were incorrect, adding that law enforcement’s remarks were an attempt to “weaken encryption.”

“On this and many thousands of other cases, we continue to work around-the-clock with the FBI and other investigators who keep Americans safe and bring criminals to justice,” Apple said in a lengthy statement. “As a proud American company, we consider supporting law enforcement’s important work our responsibility. The false claims made about our company are an excuse to weaken encryption and other security measures that protect millions of users and our national security.”

“It is because we take our responsibility to national security so seriously that we do not believe in the creation of a backdoor—one which will make every device vulnerable to bad actors who threaten our national security and the data security of our customers. There is no such thing as a backdoor just for the good guys, and the American people do not have to choose between weakening encryption and effective investigations.”

Law enforcement has routinely pushed for a backdoor into encryption—and that argument has once again cropped up as part of the controversial EARN IT Act, a bill that digital rights groups claim opens the door.

The bill would strip websites’ immunity under Section 230 of the Communications Decency Act unless they adhere to a set of “best practices” for getting rid of sexual exploitation content online. However, since the Justice Department would be part of the panel that creates those practices, it is not a leap to think a backdoor into encryption could become one of them.