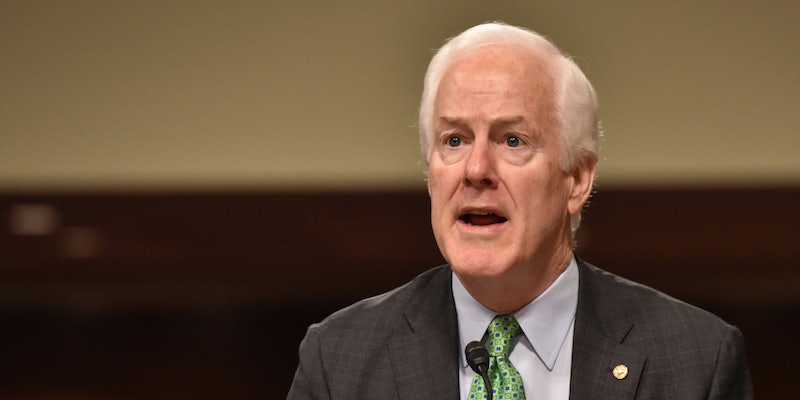 There are several instances in the past that have shown politicians can't block constituents.

The Knight First Amendment Institute at Columbia University reminded Sen. John Cornyn (R-Tx.) on Wednesday that just because a Twitter user criticized his response to the coronavirus pandemic, he can’t block them on Twitter.

Cornyn was sent a letter on Wednesday explaining that the senator blocked a Texas voter on Twitter after he replied to one of Cornyn’s tweets criticizing his response to the coronavirus pandemic.

According to the letter, the voter, Heath Mayo, replied to a tweet in mid-March in which the senator posted a photo of a Corona beer and said, “Be smart; don’t panic. We will get us through this #coronavirus.”

Mayo responded, “I just don’t understand the thought process that gets a senior-ranking Senator to say: ‘You know what? I think I’ll post this picture of a Corona beer in an empty restaurant where I’m dining, in direct disregard of CDC & gov’t guidance—a gov’t for which I’m a spokesman.'”

Mayo was blocked from viewing Cornyn’s account shortly after, the letter says.

The Knight First Amendment Institute at Columbia University’s letter noted several recent incidents in which courts have found that politicians can’t block constituents who are critical of them on social media.

The courts ruled that because politicians use their social media accounts as a way to disseminate information—in Cornyn’s case, information about the coronavirus pandemic and the government response—it is a public forum and subject to the First Amendment.

The United States Court of Appeals for the Second Circuit ruled in 2019 that President Donald Trump blocking critics on Twitter was unconstitutional amid a lawsuit brought against the administration by the Knight Institute and a group of Twitter users.

Similarly, Rep. Alexandria Ocasio-Cortez (D-N.Y.) apologized for blocking a critical Twitter user who sued her on the same day as the Court of Appeals’ decision about Trump.

The New York representative said she reserved the right to block users who “engage in actual harassment or exploit my personal/campaign account, @AOC, for commercial or other improper purposes.”

The letter from the Knight Institute notes there are “many other individuals” who say they have been blocked by Cornyn’s account.