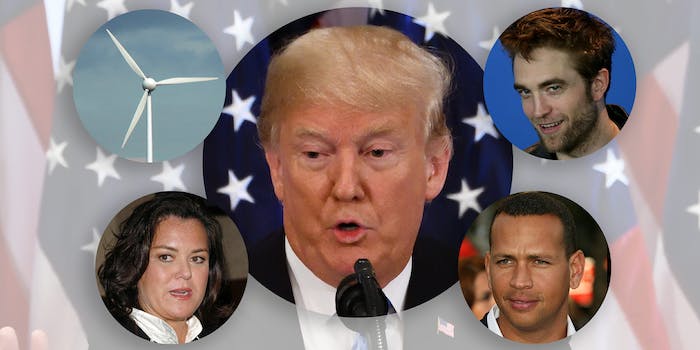 He's got some interesting obsessions.

Having the Donald in the White House has probably been the most successful thing to happen to Twitter’s business in the 12 years the site has been around. The company has a literal monopoly on the early-morning rants of the president—imagine if he was calling up the Washington Post and dishing his thoughts every morning.

But Trump’s Twitter antics date back to long before he earned a desk in the Oval Office. Over the years, he’s had a number of absurd tweets and a number of bizarre obsessions on the micro-blogging platform. Here are a few of the strangest things he’s obsessed with over the years.

Then-citizen Trump was enraged when rapper Mac Miller released a song titled “Donald Trump” in 2011. At first, Trump seemed pleased with the name-check as Miller spits the hook, “Take over the world when I’m on my Donald Trump shit/Look at all this money, ain’t that some shit.”

But the president’s glee quickly turned sour when he realized that he wasn’t going to see a paycheck from the tune.

During 2012, he began to sound more like a landlord, tweeting at Mac “where’s my money” and “where’s my cut.” Finally, he dropped the niceties all together and unloaded on the youngster:

It was just announced that @MacMiller’s song “DonaldTrump” went platinum—tell Mac Miller to kiss my ass!

Little @MacMiller, I’m now going to teach you a big boy lesson about lawsuits and finance. You ungrateful dog!

Trump did not have anything to say when the rapper passed.

The president’s feud with Rosie O’Donnell is extremely well-documented but that doesn’t make it any less bizarre. Most people say that the argument began in 2006 when Rosie said on The View that Trump had gone bankrupt.

"@ForeverMcIn: @realDonaldTrump how much would it take for you to make out with Rosie O'Donnell?" One trillion, at least!

He’s tweeted about her over 60 times since he first criticized the celeb in December of 2011. The animosity even reared its head at a presidential debate when he defended his attacks on women by saying that he only criticizes Rosie.

Donald Trump’s strangest fixation is with Twilight actor Robert Pattinson, specifically Pattinson’s relationship with his co-star, Kristen Stewart. He was extremely frustrated that Pattinson was considering dating Stewart after their relationship went sour—the president wrote, “she cheated on him like a dog & will do it again.”

Everyone knows I am right that Robert Pattinson should dump Kristen Stewart. In a couple of years, he will thank me. Be smart, Robert.

Trump seemed to think that Pattinson “took [his] on Kristen Stewart” and predicted that “after Twilight’s release, Robert will not be seen in public with Kristen again.”

His fascination with the star of a pre-teen fantasy film got even weirder when he announced in 2012 that Pattinson had “open invite” to the Miss Universe pageant.

If you didn’t know, Donald Trump really, really, really hates windmills. This quixotic obsession began when a Scottish windfarm decided to set up shop near one of Trump’s golf courses and he became infuriated that they would ruin the view. He tried, unsuccessfully to block the farm and he’s considered windmills a personal enemy ever since.

On Twitter, Trump has claimed that windmills “are destroying every country they touch” and “are the greatest threat in the U.S. to both bald and golden eagles.”

In total, he’s tweeted about them over 20 times and his rage toward windmills wasn’t abated after he got into office—as recently as August of 2018, he told a crowd “they kill so many birds. You look underneath some of those windmills, it’s like a killing field, the birds.”

It’s unclear where Trump heard the term “haters and losers” but those three words constitute a substantial piece of his Twitter vocabulary. He’s tweeted about these anonymous detractors almost 50 times (with variations of “haters & losers” and “haters and losers”).

Every time I speak of the haters and losers I do so with great love and affection. They cannot help the fact that they were born fucked up!

Strangely, the president seems to regularly feel remorse or at least empathy for the “haters and losers” and he’s always quick to think of them during an important moment—he’s wished them a Happy Father’s Day (twice), a Happy Veterans’ Day, a Happy Thanksgiving, a Happy Memorial Day, a Happy Easter, a Happy New Year, a Happy 4th of July. He even extended his best wishes to them on September 11.

He doesn’t do it much anymore, but Donald Trump used to constantly tweet out inspirational quotes that caught his eye and one of his favorite thinkers was Albert Einstein. Over the course of 15 months (May 2012 to August 2015), he sent out 31 quotes by the late physicist.

"It's not that I'm so smart, it's just that I stay with problems longer." Some good words from Albert Einstein. It pays to be tenacious.

It’s unclear where Trump was finding all these bite-sized bits of wisdom but he’s actually pretty fond of quotes. He’s also tweeted out Lao Tzu, Joe Montana, Babe Ruth, his father (Fred Trump), and Aristotle. But none of those figures have been quoted as much as Einstein.

The president fervorous tweeting about Derek Jeter and Alex Rodriguez is probably the most understandable category on this list. Trump is a New Yorker at his core and no fan who bleeds their team’s colors can be blamed to bashing about on Twitter then the franchise makes a boneheaded move.

We must leave "stop and frisk" for A-Rod and Anthony Weiner!

In this Yankees rivalry, Trump is behind Jeter all the way. He’s claimed that the staff at his properties loved Jeter but hated A-Rod and said that A-Rod “simply can’t perform without drugs.”

He doesn’t wear a wig

According to James Comey’s memoir, Donald Trump actually doesn’t wear a wig. And if you take a scroll through the president’s Twitter, you’ll find him defending his hair time and time again. By our count, he’s tweeted about it on ten occasions.

Whenever one of the morons say I wear a wig, stop reading because they have no credibility & just hate.