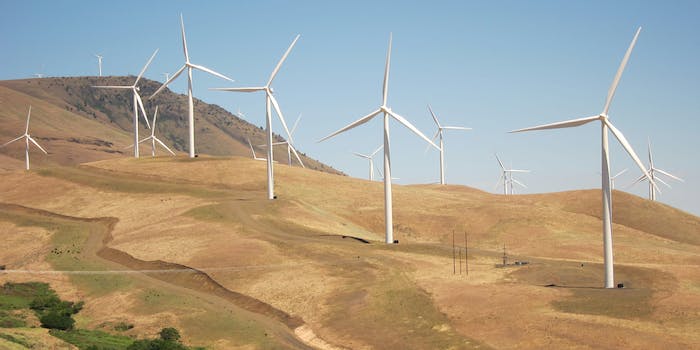 Why is Donald Trump so obsessed with wind turbines killing birds?

Donald Trump's decision was for the birds.

Donald Trump delivered on a longstanding campaign promise Thursday by withdrawing the United States from the Paris Climate Accord, an announcement that, speaking without hyperbole, really did reverberate throughout the planet.

The main goal of the Paris Climate Accord is to reduce global emissions to ameliorate the human impact on our planet’s climate. It was agreed upon by every other country on Earth save two. There were many reasons given for Trump’s landmark decision. There are people who believe that the U.S. is unfairly impacted by the agreement. There are doubts about the efficacy of reducing carbon emissions. Some think it simply shows that America won’t kowtow to the world order.

But maybe the president had an ulterior motive? It’s not always fair to consider Donald Trump’s tweets as the tea leaves to his mind, but the man does seem to have a strong dislike for wind energy.

Why? Because they kill birds.

In August 2012, he bashed wind turbines for killing thousands of birds.

Wind farms are killing many thousands of birds. They make hunters look like nice people!

"Wing bangers"– the name given to wind turbines by bird lovers for the thousands of birds they kill in the U.S.

Wind turbines are not only killing millions of birds, they are killing the finances & environment of many countries & communities.

He was also upset not just about the death of birds, but how wind farms alter their migratory patterns.

A year later, a study was taken by the Canadian Free Press and extrapolated to claim turbines caused the death of 13 million bird each year in the U.S. Trump began to trumpet that number (as well as the higher end of the estimate, 39 million).

Obama's wind turbines kill “13-39 million birds and bats every year!” https://t.co/33vZUrkKu2 Save our bald eagles, symbol of our nation!

It’s worth noting that the U.S. Fish and Wildlife Service puts the number at 174,000 annually. Trump did not relent.

"@Jahbalon: Why is Sierra Club not speaking up for the birds slain by turbines? MUST READ from biologist https://t.co/kVamtIaYnM

"@DouglasSeacat1: Where are all the liberal environmentalists demanding the end of wind turbines to stop the slaughter of birds?" So true!

Interesting, that last tweet was sent from Scotland, where Trump led a campaign to stop a wind farm, not because of bird deaths but because he believed them to be unsightly.

Trump also claims that wind turbines are worse for birds the fossil fuels.

"@California_Bloo: @NewsCorpse @realDonaldTrump <<<< This is the same douche that said windmills were worse for birds than oil. MUCH WORSE!

Although estimates vary, coal is by far the biggest contributor to bird deaths when factoring in the effects of climate change, according to U.S. News and World Report.

"@brodie7878: @realDonaldTrump @arcuate We will have electric and people will make money but birds will be extinct in 20 years."

"@big1john: @realDonaldTrump wind turbine blades will slice 14 million birds and bats to death in mid-flight during the next decade.

It's Friday. How many bald eagles did wind turbines kill today? They are an environmental & aesthetic disaster.

It’s a drum Trump beat during the 2016  campaign as well.

“The wind kills all your birds,” he said at a rally in August 2016. “All your birds, killed. You know, the environmentalists never talk about that.”

Multiple White House officials did not respond to a query as to whether the president is an avian enthusiast.

But… probably not. Because it should be noted that the single largest cause of death in birds, responsible for the deaths of billions every year, is cats. And for what it’s worth, Trump has never tweeted any dissatisfaction with them