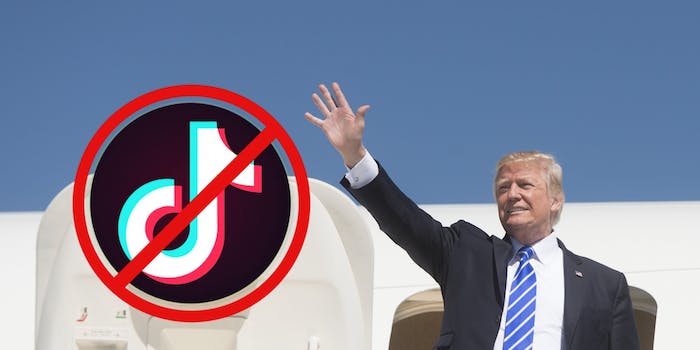 TikTokers are suggesting ways to bypass a potential ban.

This morning, President Donald Trump announced TikTok would be removed from U.S. app stores on Sunday. With a potential ban days away, TikTok users are feverishly discussing ways to bypass restrictions on the app.

A wide range of videos on the platform suggest that users can continue using TikTok by doing anything, from changing their phone’s settings to installing a VPN.

The U.S. government has repeatedly expressed national security concerns over the Chinese-owned app, leading Trump on Friday to suggest that a ban was imminent.

“As far as TikTok is concerned we’re banning them from the United States,” Trump said.

While it remains unclear whether the ban will actually take place, the U.S. would not be the first country to bar access to the app.

India banned the app just last month amid escalating tensions between New Delhi and Beijing. And though it’s uncertain how a U.S. ban would be carried out, actions taken by users in India could give insight into bypassing such restrictions.

One likely outcome of a ban would almost certainly see the TikTok app removed from both the Apple Store and Google Play. Although there are exceptions to the rules, for the average internet user little could be done to circumvent such action.

For starters, changing the “language and region” settings in your phone, as one TikTok user suggested, would not work.

Given that Apple approves all apps in its store, getting the TikTok app to work on an iPhone would be difficult for non-technical users.

Android phones, on the other hand, allow users to install apps from outside of Google Play by adjusting certain settings. Theoretically, TikTok could let Android users download the app directly from its website. But even then, depending on how the ban is enforced, the app could still be blocked on the network level.

So what about VPNs? Virtual Private Networks (VPNs) mask your computer’s IP address by routing your internet traffic through servers across the globe.

A VPN in nearly all cases would not allow you to access the app on your phone once it’s been restricted, but you could still use TikTok. The easiest way to do so would be by using the web version of TikTok instead.

Whether on your phone or computer, logging into a VPN and accessing the TikTok site through your web browser would almost certainly work. Users in India have done this and the same for many in China, where countless U.S.-based apps are banned.

TikTok remains untouched for now, and a ban may not move forward. But if it does, it will be largely unenforceable.