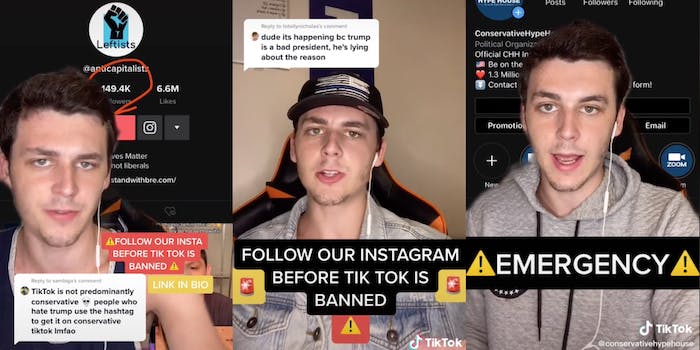 'I do not understand why this is happening.'

A popular online group, known as the “Conservative Hype House,” has come out against President Donald Trump’s decision to ban TikTok.

The right-wing collective, which currently boasts more than 1.4 million followers on the Chinese-owned app, came out on Friday in opposition to the anticipated ban.

“As far as the decision itself I absolutely do not agree with this decision whatsoever,” Conservative Hype House member Cameron Higby says.

Trump on Friday told reporters that he intends to ban the app as soon as Saturday, possibly taking executive action to do so.

“As far as TikTok is concerned we’re banning them from the United States,” Trump said.

The U.S. government has long expressed concern over the potential national security implications of the app. The Pentagon, in particular, has urged U.S. service members and their families to avoid putting the app on their phones.

But the Conservative Hype House further pushed back on Trump’s remarks by calling TikTok, which has 80 million daily users, a trustworthy app.

“TikTok has an American CEO, and they’ve taken measures to make sure that the Chinese government cannot seize any information harvested on Americans,” Higby says. “Every company, every social media company, harvest your information for marketing purposes. TikTok does the same thing except they live in a country where their government could seize that information.”

Higby goes on to stress that data on American users has been moved to servers “where the [Chinese] government cannot seize that information.”

“So I do not understand why this is happening,” he says.

Higby also pushed back on the assertion that Trump’s decision is based more on personal gain than national security.

In a video on Saturday, TikTok U.S. General Manager Vanessa Pappas stated that the company is “not planning on going anywhere.”

In response to the potential ban, TikTok’s parent company ByteDance is reportedly planning to give up its U.S. stake in the app to Microsoft. Whether such a move would convince Trump to cancel his plans to ban the app remains to be seen.