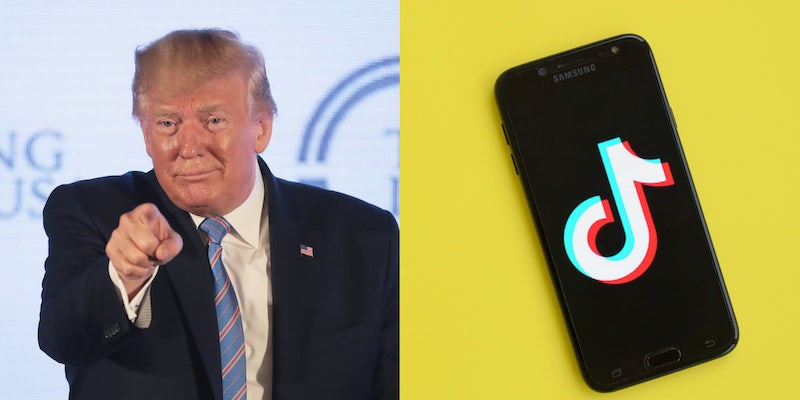 If they don't postpone, the ban will come down to a hearing on Sunday.

A federal judge is giving President Donald Trump’s administration until this afternoon to postpone its scheduled download ban of TikTok, or face a legal hearing on Sunday to determine what happens next for the proposed ban of the popular app.

Judge Carl Nichols of the U.S. District Court for the District of Columbia held a hearing on Thursday following TikTok’s request for a preliminary injunction to halt Trump’s ban.

Nichols, according to the Wall Street Journal, picked apart the administration’s arguments that the download ban—currently scheduled for Sunday at 11:59pm—wouldn’t harm TikTok. The Sunday ban would prevent new users from signing up, with a more broad ban scheduled for Nov. 12.

The judge said that the Trump administration has until 2:30pm ET today to voluntarily postpone it’s impending download ban, or there would be a hearing on Sunday morning to see if TikTok’s request to halt it would be approved.

All of stems from Trump’s executive order in August that aimed to ban the app unless the U.S. operations were taken over by an American company. After a lot of rumors about an acquisition, Oracle and Walmart agreed to a deal with ByteDance, the Chinese company that owns TikTok, that would see the creation of a new company, TikTok Global.

The Trump administration has raised data security concerns because TikTok is owned by ByteDance. The Chinese government has a history of forcing tech companies to hand over data, leading to concerns that TikTok could do the same. TikTok has defended itself, saying that U.S. user data is stored in the U.S.

With news of the proposed deal with Oracle and Walmart—which still needs government approval—the Commerce Department delayed its initial deadline for a ban on new users downloading TikTok. The new deadline is this Sunday at 11:59pm.

On Wednesday, TikTok filed a request for an injunction as the ban loomed. Within it, TikTok’s lawyers noted that Trump only “began targeting” the app after its users claimed to artificially inflate the reservations for a campaign rally in Tulsa, Oklahoma.

In response, the Trump administration argued that while the download ban on Sunday would prevent new users from signing up, it would “otherwise largely preserve the status quo.”

Nichols did not agree with the administration, according to the Journal.

Update 3:35pm CT, Sept. 25: The Department of Justice argued against TikTok’s request for an injunction on Friday, setting the stage for the judge to rule on the request before Sunday’s download ban.

The Trump administration could have extended the deadline like it did last week, but it instead chose to oppose TikTok’s request for the judge to halt the ban. The full text of the Justice Department’s opposition was filed under seal—that is, not publicly—because it contains confidential business information.