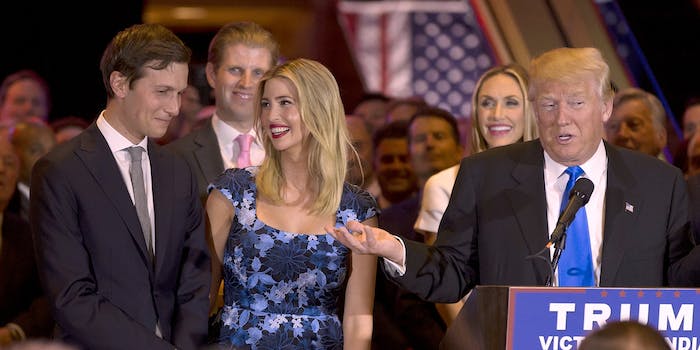 A senior member of the Trump transition team confirmed to NBC News on Monday that Kushner will be appointed as a senior advisor to Trump. Kushner, 35, is married to Trump’s daughter, Ivanka, and is the principal owner of Kushner Industries, a real estate holdings company, as well as Observer Media, which publishes the New York Observer.

“Mr. Kushner is committed to complying with federal ethics laws and we have been consulting with the Office of Government Ethics regarding the steps he would take,” Kushner’s lawyer told NBC.

As a special White House appointment, Kushner will not be subjected to U.S. Senate confirmation or the OGE ethical review process. (The U.S. Office of Personnel Management oversees special appointments, not the OGE.) He will be required, however, to complete a public financial disclosure form, which is reviewed by OGE.

Confirmation of Kushner’s appointment raises new questions about conflicts of interest within the incoming Trump administration, specifically with regards to a federal anti-nepotism law passed by Congress in 1967 after President John F. Kennedy appointed his brother, Robert, as attorney general.

“A public official may not appoint, employ, promote, advance, or advocate for appointment, employment, promotion, or advancement, in or to a civilian position in the agency in which he is serving or over which he exercises jurisdiction or control any individual who is a relative of the public official.”

However, as NPR congressional correspondent Ailsa Chang wrote in November, there may be some wiggle room for Trump and Kushner thanks to ambiguity surrounding the statute’s definition of “agency,” and whether the law means to include the White House or not.

As Chang also noted, there’s some disagreement among legal scholars about the effects of past judicial opinions related to the White House and the anti-nepotism statute, as well as debate over whether White House staff are subject to the same laws as, say, the Department of Justice. (When it comes to the Freedom of Information Act, for example, they are not.)

It may also be the case that Kushner avoids violating the the anti-nepotism statute by not accepting a salary. “If Jared is receiving compensation for his duties, even as a special governmental employee, this would run afoul of the anti-nepotism law,” Craig Holman, a government affairs lobbyists at Public Citizen, said in an email to the Daily Dot.

Since the anti-nepotism law was passed few U.S., presidents have sought to challenge the statute. After first President Bill Clinton appointed his wife, then-First Lady Hillary Clinton, to head his Task Force on National Health Care Reform, a D.C. circuit judge’s opinion noted that her appointment did not appear to violate the anti-nepotism law; nepotism, however, was not an issue in the case, so there remains some controversy over whether the judge’s remarks are valid in the legal sense.

Few would argue, however, that the spirit of the anti-nepotism law does not extend to the nation’s highest office. In the United States, the hiring of one’s relatives over more qualified or experienced individuals is generally viewed as a repugnant workplace practice.

Trump’s reliance on his family for guidance over those with experience in public service has also drawn negative comparisons to autocratic rulers. Robert Reich—a professor of public policy at the University of California at Berkeley who served under former Presidents Clinton, Gerald Ford, and Jimmy Carter—listed the hiring of relatives among behavioral traits frequently observed in “tyrants”—along with the tendency to refer to one’s political opposition as “enemies” and making claims of massive voter fraud in the absence of evidence.

A top government ethics official criticized Trump late last week for attempting to push through Cabinet picks before adequate background investigations were completed. Walter Shaub, director of OGE, said in letter Friday that Trump’s nominees had not completed an ethics review, which is required before their confirmation hearings.

“I am not aware of any occasion in the four decades since OGE was established when the Senate held a confirmation hearing before the nominee had completed the ethics review process,” wrote Shaub.

The dodging of ethical reviews could pose a problem for Trump down the road, if—for example—allegations of past corruption or fraud are unearthed subsequent to a nominee’s confirmation.