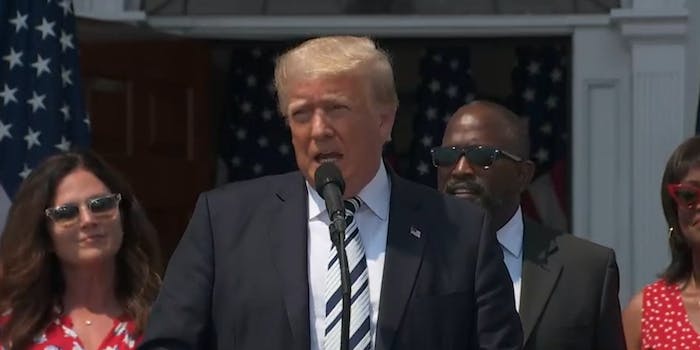 Former President Donald Trump announced that he was suing big tech companies like Facebook, Google, and Twitter yesterday, but experts are already predicting that the lawsuit won’t go very far.

Trump unveiled his lawsuit in a press conference on Wednesday, calling it “beautiful” and framing it as a way to fight back against his long-standing—yet light on evidence—belief that social media companies have a bias against conservatives.

Trump naturally has a personal interest in fighting the companies. He was banned from Facebook, Twitter, and YouTube after posting on the platforms following the Capitol riot. Since being booted off the platforms, Trump’s reach online has plummeted. His attempt to launch a personal blog to reach his followers was shuttered after getting very little engagement.

With his eye on potentially running for president again, that online reach would be important to him. And the lawsuit also serves as fodder to his fans after railing against tech companies for years during his presidency.

As for the likelihood of his lawsuit succeeding, the general consensus seems to be that it is nothing more than a “stunt.”

“This lawsuit is a stunt and it’s unlikely to find traction in the courts,” Jameel Jaffer, executive director of the Knight First Amendment Institute at Columbia University, said in a statement. “The argument here that Facebook should be considered a state actor is not at all persuasive. It’s also difficult to square the arguments in the lawsuit with President Trump’s actions in office. The complaint argues that legislators coerced Facebook into censoring speech, but no government actor engaged in this kind of coercion more brazenly than Trump himself.”

The lawsuit’s likely purpose—an attempt to galvanize his base at a time where he’s struggled to get the same attention he did while in office—was on full display shortly after the announcement.

Fundraising emails were sent out asking people to contribute “any amount right now to show your support for President Trump’s lawsuit against Big Tech.”

“This is not a lawsuit. It’s a fundraising grift. While it’s silly to pretend that the moderation decisions of Big Tech don’t have a significant impact on free expression, the First Amendment enables private platforms to make exactly the kind of moderation decisions they wish to make as non-government entities. From a legal perspective, this lawsuit is likely to go nowhere,” Evan Greer, the director of Fight for the Future, said in a statement. “Moreover, its disingenuous attack on Section 230 reveals a laughable misunderstanding. Without 230, platforms would likely have removed controversial figures like Trump long ago.”

Trump’s suit asks a court to declare Section 230 of the Communications Decency Act—an important internet law that became a fixture of Trump’s attacks—unconstitutional. Within the suit, it lists numerous Democrats who have brought up changing the law and argues that those comments “coerced” the companies to ban Trump. It conveniently leaves out Trump’s repeated attacks on Section 230 and calls for it to be repealed.

Meanwhile, Paul Barrett, the deputy director of the Center for Business and Human Rights at New York University’s Stern School of Business, put it simply when talking to the Associated Press: “Trump’s suit is DOA.”

“The First Amendment applies to government censorship or speech regulation. It does not stop private-sector corporations from regulating content on their platforms,” Barrett told AP. “In fact, Facebook and Twitter themselves have a First Amendment free speech right to determine what speech their platforms project and amplify—and that right includes excluding speakers who incite violence, as Trump did in connection with the January 6 Capitol insurrection.”