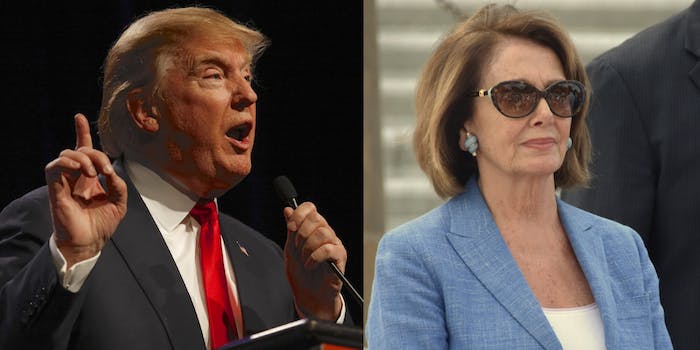 Pelosi said she was worried about someone of his 'weight group' taking hydroxychloroquine.

Following news from President Donald Trump that he is taking hydroxychloroquine—an anti-malarial drug—to prevent catching coronavirus, CNN’s Anderson Cooper asked Pelosi for her thoughts. The speaker of the house immediately noted her concern, given the U.S. Food and Drug Administration’s warnings about the drug. It was her note about the president’s weight, however, that really caught people’s attention.

“He’s our president, and I would rather he not be taking something that has not been approved by the scientists,” Pelosi said in the interview. “Especially in his age group and in his, shall we say, weight group. What is ‘morbidly obese,’ they say. So I think that it’s not a good idea.”

Pelosi’s remarks made immediate waves online. The hashtags #PresidentPlump and #MorbidlyObese both began trending on Twitter, where users quickly began poking fun at the president’s weight. While a rare few tweets actually express concern over Trump’s weight, the majority lean on weight-related jokes and barbs to make their point.

As noted by CNN at the end of the interview, “Trump’s last reported weight, 243 pounds, at his reported 6-foot-3 height would put his body mass index in the obese, but not morbidly obese, range.”

Regardless of this fact, the jokes came in swift and brutal.

“Welcome to the girther movement, Nancy Pelosi,” one user joked. “We must demand to see Trump’s girth certificate! #PresidentPlump.”

Users were quick to point out Pelosi’s careful use of Trump-esque rhetoric. Rather than outright call the president obese, Pelosi used a common Trump tactic by noting that a broad “they” say he is overweight. One Twitter user said Trump has used the practice time and again to side-step blame for the things he says.

Some people were unsurprisingly offended by the trend. Body shaming is still body shaming after all, regardless of who is on the receiving end. Twitter users on both sides of the aisle weighed in, many noting the problematic trend of fixating on weight.

“Nancy Pelosi should not comment on anyone’s appearance,” one commenter wrote. “Besides being ultra tacky, it is way too low for a Congress person, even a Democrat one.”

“Karma is a b*tch,” one user wrote. “All those years of fat shaming women…well anybody. Including his own daughter. As he would say this is a tremendous and beautiful thing. At the standpoint of irony.”

Trump has yet to respond to Pelosi’s comments.