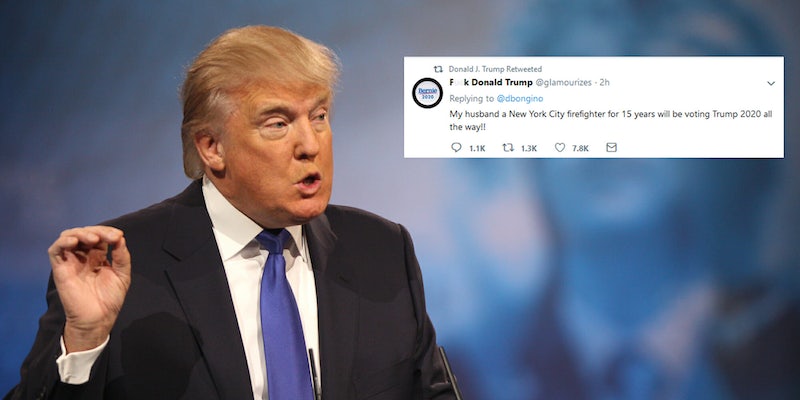 The changed username was up on the president's Twitter page for hours.

President Donald Trump smashed the retweet button nearly 60 times on Wednesday morning, boosting the voices of people claiming they are firefighters who will vote for him in the 2020 presidential election—including one that reportedly changed its name to “F*ck Donald Trump.”

The retweets came as the president was commenting on a post by Fox News personality Dan Bongino who claimed that “none” of the firefighters he knows will be voting for former Vice President Joe Biden, who recently announced that he would be seeking the 2020 Democratic nomination.

The International Association of Firefighters endorsed Biden earlier this week.

“I’ve done more for Firefighters than this dues sucking union will ever do, and I get paid ZERO!” Trump wrote, retweeting Bongino.

I’ve done more for Firefighters than this dues sucking union will ever do, and I get paid ZERO! https://t.co/Tw0qwTiUD6

Following his tweet, the president retweeted nearly 60 people who replied to Bongino’s tweet, many of who claimed they were firefighters–or knew firefighters–that planned on voting for Trump in the 2020 election.

The tweet stayed up until Wednesday at 8:00am CT, when it was taken down. Until then, the president had not unretweeted the user, leaving the “Fuck Donald Trump” account on his timeline.

“What a great morning. In all seriousness, our president is an awful, hateful human being who wants nothing more than to keep the status quo and hatred prevalent in our country when we should be pushing forward with the rest of the world towards progress and change. Please vote,” they wrote.