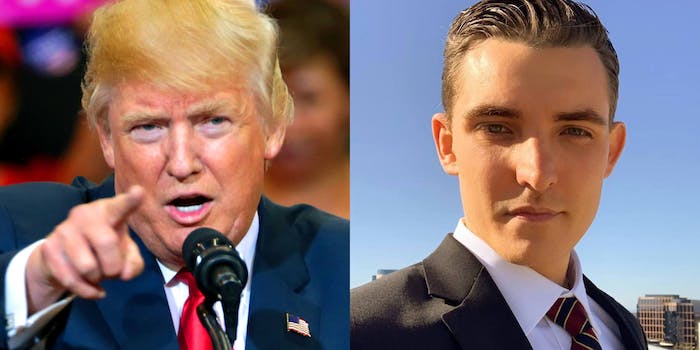 Wohl himself has bragged about running it.

The account, which was retweeted by President Donald Trump today, relentlessly shares pro-Trump sentiments while tagging the commander-in-chief. Trump has retweeted the account at least six times.

The Daily Dot previously reported that Wohl was operating Jack Burkman’s Twitter account. Burkman is a registered D.C. lobbyist who has aided Wohl in bogus smears.

Let’s find out- there’s a poll in the tweet attached to this one, go vote now! https://t.co/CNKZrlnMcC

Awwww, Jacob/CC is having problems with his/her retweet levels. He/she should really file a report with Twitter. You know, give his/her name…

Is CC really an alias of Jacob Wohl ! This Jacob Wohl? So when did he trans ? Sex changed but still the same old criminal jerk though … pic.twitter.com/pAYlcAsW27

@ChatByCC Has 317.5K followers and 426K tweets. They don't pass the botcheck test. There is also rumors that this is an account of Jacob Wohl, the disgraced "political operative" who has been banned from Twitter. Trump replied to 'her' by name! pic.twitter.com/jmx83SDPLb

Wohl did not respond to the Daily Dot’s request for comment, but has previously denied running the account, characterizing it as a “ludicrous question.”

Previously, a Twitter spokesperson issued the following statement to the Daily Dot regarding why Wohl was permanently suspended from the platform: “Jacob Wohl’s account was suspended for multiple violations of the Twitter Rules, specifically creating and operating fake accounts.”

Wohl though has also spread misinformation about himself, so take this claim with a grain of salt, too.

Update 3:23pm CT, Dec. 16: Twitter suspended @ChatByCC after an inquiry from the Daily Dot, but did not respond to questions about the account’s provenance. On Instagram later in the day, Wohl claimed he was again behind the account.