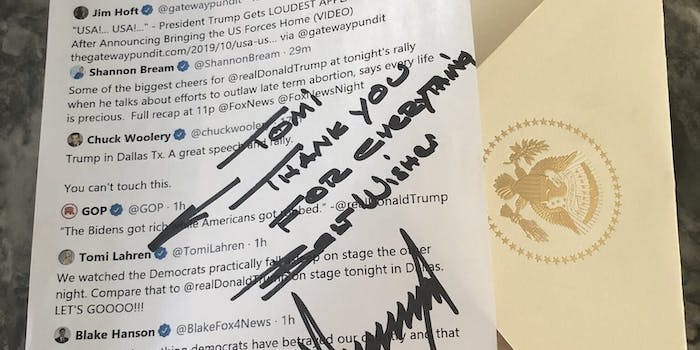 Trump used the print-out of positive tweets about himself to thank her.

If the autographed list of tweets President Donald Trump sent conservative commentator Tomi Lahren is proof of anything, it’s the sad revelation that the president has White House staff compile ego-stroking lists of glowing reactions to his public appearances from his most hardcore, conspiracy pushing supporters.

Lahren posted a thank you tweet to the president on Wednesday after receiving what appeared to be a hard copy of the list, which included a handwritten message of gratitude from the president. The Daily Dot does not believe the engagement ring was part of the president’s mail package.

Let’s face it, people, nobody expected a Twitter reactions memo like this to be some cross-partisan gauging of opinion. Everyone knows that our reality television show president is obsessed with ratings and drunk on public image.

computer, show me one image that epitomizes the Trump administration https://t.co/a9khdwp4fC

More evidence of how pathetically narcissistic and weak @realDonaldTrump is- his staff is reduced to making printouts of positive tweets to make him feel good about himself. Thanks for sharing this Tomi, we never would have known this particular indicator otherwise. https://t.co/20gr8Ty7Nr

The news, of course, raises new and serious questions about the state of the administration. A scoop by Lahren that tells the true story of a president desperately mining his self-worth from the tweets of grifters and conspiracy maniacs like Hoft, pushing the most oddly overt engagement ring flex in history.