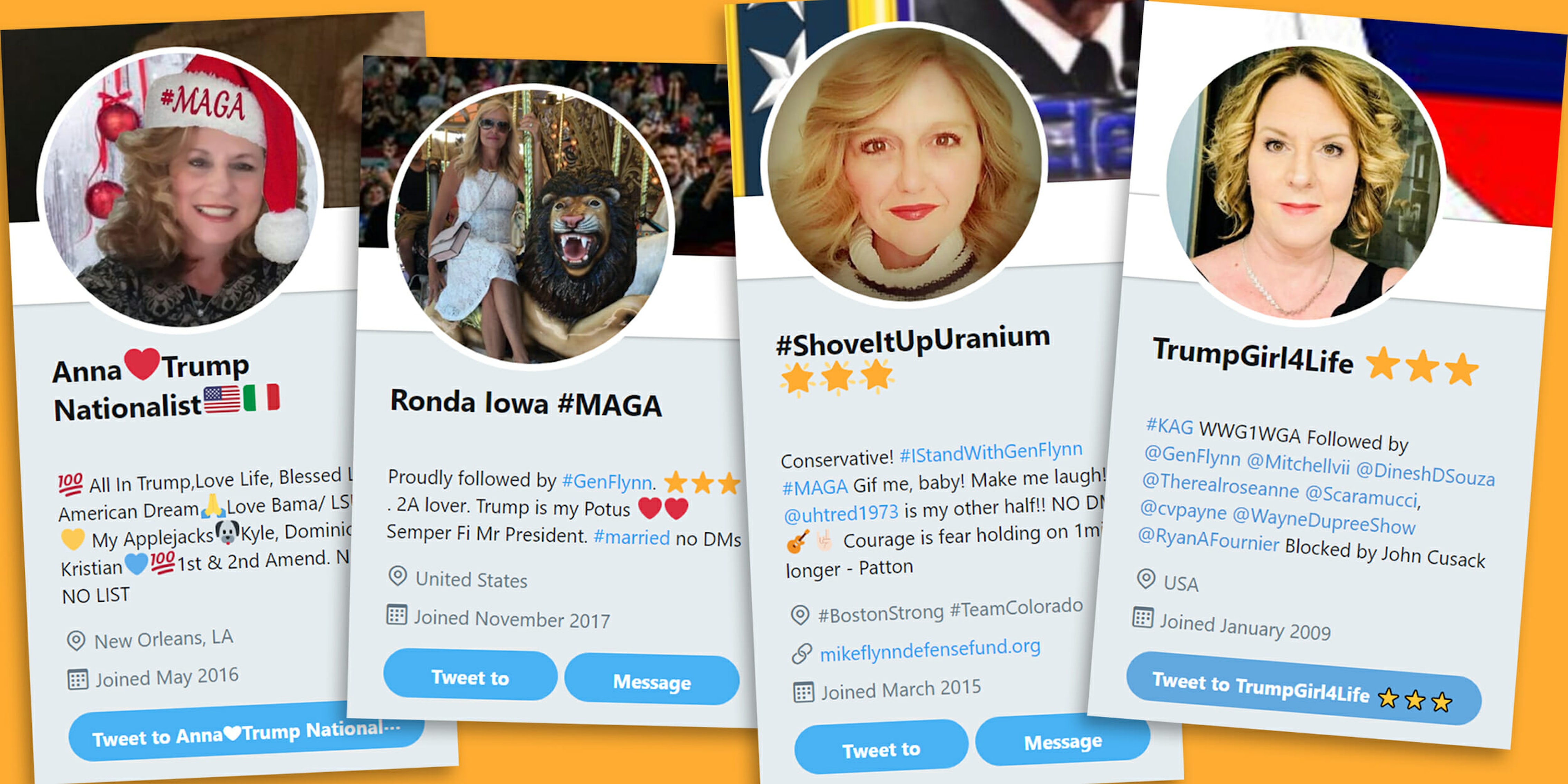 If you spend even the slightest amount of time talking about politics on Twitter, you will eventually notice a great mass of nearly-identical looking conservative accounts.

All of them are cut from the same digital cloth in terms of their look, conversational patterns, political leanings, and interests.

Most recently, this online army has taken to putting three emoji gold stars in their profiles, a tribute to former National Security Adviser Michael Flynn, who they continue to insist has done nothing wrong, despite Flynn having pleaded guilty to lying to the FBI in a Special Counsel investigation into President Donald Trump.

It’s easy to write this endless army of Twitter foot soldiers off as a swarm of bots, and indeed, it’s likely that some are.

But it’s clear that there a great deal of people who spend a great deal of time piling up followers, re-tweeting memes, and spewing Trump propaganda. They look and act exactly like bots, but they’re not.

And they exist in a sealed-off world that makes them susceptible to virtually anything, from violent memes to straight up hoaxes, sharing them without the slightest research as to whether they’re real.

So what’s with all the emojis and hashtags? How do they have so many followers? Are their complaints about censorship—a practice they call “shadowbanning” —real? And while many of them reference the conspiracy theory QAnon, how many are actually believers?

Because the world of right-wing social media is so insular, it’s difficult to find out anything useful just through research.

So I decided to understand this world by joining it. I created a Twitter account that would look like and post exactly like a far right, Trump ride-or-die true believer, complete with hashtags and emojis, relentless following, and letting nothing else in.

And to capitalize on the zeitgeist of QAnon breaking through into the mainstream, I focused on Q iconography.

Things you can tonight to help #QAnon:

– If you go out for dinner, write "research QAnon" on your receipt

– if you see friends, ask them they've heard about Qanon, and truthfully answer their questions

My first step was to create the screen name @ClearPatriot, as a takeoff on Q’s original call sign “Q Clearance Patriot,” at 3pm PST on August 2nd.

Great night, patriots. Can't wait to see what the shills in LA and NY have to say about us. Tens of thousands of words in hundreds of hit pieces about how we don't matter and we're crazy. lol!#maga #QAnon #WWG1WGA #KGA #TrumpForLife

That profile was stuffed full of Q hashtags, and used a generic QAnon image as an avatar. It then followed @RealDonaldTrump and 25 accounts with #QAnon in their profile, the most a new account can follow before being locked out of Twitter.

My first post as @PatriotClear was declaring that its previous account had been closed (which was not true), with a full complement of hashtags extolling Trump and QAnon.

Over the next few hours, I made a few more posts, and followed as many right-wing accounts as Twitter would allow.

Finally, a few hours after being created, I live-tweeted reactions to Trump’s rally in Wilkes Barre, Pennslyvania for an hour, then signed off.

Coming back at 11:30 next day, the account already had 150 followers. After another day of following and retweeting, it had 500 followers, and over a thousand followers after a week.

Over the next month, I spent an hour or two every day posting, following, retweeting, and commenting—but only Trump supporting accounts.

The first thing that became clear is why these accounts manage to have a follower growth that outpaces the standard Twitter user. Not only do they follow everyone they come across, they also participate in what are called “follow trains.”

Follow trains are long strings of tweets that contain nothing but the screen names of Trump supporters. A few accounts (which may or may not be bots) put them together and retweet them, with users encouraged to follow every account on the train, and retweet the post to their own followers.

“Follow trains” are a massive part of conservative Twitter, as these accounts follow everyone on each follow train tweet, while retweeting them to their own followers. And while winding up one on will get you countless new followers, it will also make your mentions an absolute mess.

Ironically, while the use of follow trains will get you more followers, it will reduce engagement with your original tweets.

The reason lies in Twitter’s algorithm. When you retweet something, the original poster gets the credit for whatever engagement that retweet gets. Because so much of right-wing Twitter’s engagement is retweeting, this drags their original posts down in the site’s algorithm—meaning fewer people see these posts.

So the constant complaints about censorship and “shadowbanning” have at least some truth to them , but not for the reasons the complainers think.

Shadowbanning is the supposed practice of social media companies allowing users to stay on their service, but curtailing their ability for posts to be seen by anyone but themselves.

It can also refer to prominent posters being removed from Twitter search results, a technical glitch that Twitter appears to have dealt with. Twitter claims not to engage in this practice, but it became obvious from posting as @PatriotClear that posts by new accounts get virtually no traction, even as the account piled up hundreds of followers per day.

The reason for this is that Twitter’s algorithm gives more weight to what it sees as the “best tweets,” and less to accounts with little presence or popularity, or who do little but retweet.

Since the bulk of the tweets by many prolific conservative accounts are actually retweets, this makes their own original posts lower quality. In turn, it makes their original posts less visible. And this leads to complaints that their posts are being censored. Which they are not.

Because of this loop of low quality that I put myself in, I saw almost no posts from the vast majority of accounts I followed, and almost nobody saw my posts.

Instead, virtually everyone in this bubble sees the tweets of a small group of extremely popular right-wing pundits and personalities, people like James Woods, Dan Bongino, Jeanine Pirro, Ben Shapiro, Jack Posobiec, and Candace Woods.

Their posts, which are usually just pro-Trump, anti-liberal observations with no real content, get thousands of retweets, almost as much traction as those from Trump himself.

All federal salaries should be halved. They get total job security, self-paced work, gold-plated heath plans, holidays off, PLUS a pension. They're not supposed to have higher salaries, too. https://t.co/mJZTk4dvWA

Every time you eat an #InNOutBurger, an angel gets his wings (and a California Democrat gets a hemorrhoid)! #WinWin https://t.co/BCB0XYDtdX

Much of this content is inflammatory, and virtually none of it is related to QAnon. And this helped answer another question: how much overlap is there between Trump twitter at large and QAnon Twitter in particular?

As it turns out, not that much. There are only a few prominent accounts that analyze Q drops, often in long strings of tweets that can reach hundreds of posts.

Many other conservatives are either confused by it, put off, or actively oppose it as a foolish distraction. In fact, two of @PatriotClear’s most engaged tweets were responses to anti-QAnon posts by prominent Trump supporters Thomas Wictor (who was recently banned for making violent threats) and Jack Posobiec.

No downside to #QAnon. If he's real, then it's bye bye to the deep state. And if not, whoever it is has still redpilled millions to the evil and corruption of the Democrat party and #PedoWood.

Both are good, no?

There is NO downside to #QAnon.

If he's real, and the Storm takes place, it will destroy liberalism and godless Hollywood for a generation.

And if not, it's still opened millions of peoples eyes to the corruption and filth of the deep state and #PedoWood.

Despite the numbers on those replies, and between my own posts being “censored” and the constant deluge of follow trains and retweets, @PatriotClear’s original posts got almost no traction, even as the account reached over 2,000 followers.

Most of that account’s original posts received only a few hundred impressions, and single digit likes and retweets, even when using popular conservative hashtags.

Instead, my timeline became an inundated by the same accounts, some real and some fake, recycling the same conservative news, obsequious Trump worship, memes, gifs, Fox News clips, Bible quotes, patriotic glurge, follow trains, censorship complaints, random observations of how evil Hillary Clinton is, and posts pushing the right-wing outrage of the day.

Even more disturbingly, there was also a massive influx of fake news stories, particularly from notorious hoax sites True Pundit and YourNewsWire.

Their posts sent obviously fraudulent “news” careening through a network that has hundreds of thousands of people ready to believe it, and they’re retweeted thousands of times in the bubble.

DeSantis: ‘Monkey This Up’ Remark Had ‘Zero to Do With Race,’ All About ‘Socialist Policies’ https://t.co/I0Xj5DXkfl

Obviously, it’s impossible to know how many of these accounts are either bots or trolls. There seems to be almost no vetting by either Twitter or its members, and at no point did anyone suspect that @PatriotClear wasn’t entirely on the up and up.

Indeed, a while after I wound down the experiment, the account had already lost a substantial number of followers, indicating they were bots that Twitter shut down.

Patriots y'all need to VET your followers! These are the type of people trying to follow us thinking we BLINDLY follow back! Read their timeline! Clever @ Names are misleading! I've personally came across 6 people TODAY who followed me who are NOT Patriots or MAGA! Beware !!! https://t.co/S5pPcuGwQU

But many of the accounts definitely are real, and at least some clearly spend a great deal of time doing this.

A few days after I started my @PatriotClear experience, the AP broke a story about Twitter cracking down on accounts making hundreds of tweets per day, thinking that they were bots.

But many weren’t, and the AP highlighted one, a 70-year-old grandmother named Nina Tomasieski, who spends 13-hour days pounding out thousands of tweets in support of Trump—simply because she supports him that much.

Her timeline probably looks like an even more frenetic version of @PatriotClear, full of praise for Trump, memes, trains of people to follow, and dubious news stories.

It’s impossible to know how many people like Nina Tomasieski there are, but if spending a month as @PatriotClear was any indication, there are a lot.

They inhale and exhale Trump propaganda, conspiracy theories, and fringe memes to an audience that contains almost entirely people who agree with them. And they vote in large numbers.

The existence of this bloc of people, even if some aren’t real, is a powerful weapon, and the far-right is wielding it perfectly.