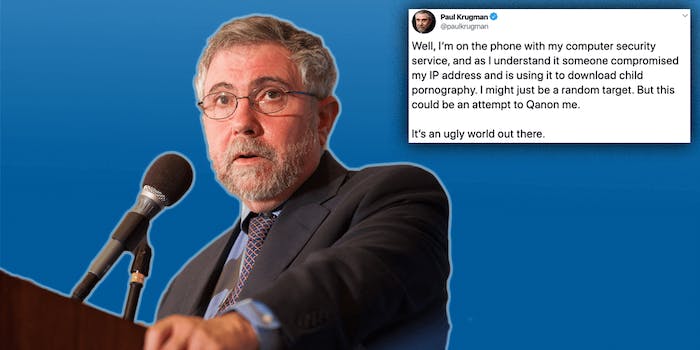 Conspiracy theorists still believe the New York Times columnist is being outed as a pedophile by QAnon.

Economist and New York Times columnist Paul Krugman stirred up the internet’s conspiracy theorists on Wednesday after appearing to fall for a well-known scam.

Krugman stated in a now-deleted tweet that he’d been warned by his “computer security service” that his IP address was being used to download child pornography.

The Nobel laureate went on to speculate that the alleged attack could be connected to followers of “QAnon,” the far-right conspiracy that claims an anonymous individual in the federal government is working alongside President Donald Trump to bring down an alleged Democrat-run pedophilia ring.

“Well, I’m on the phone with my computer security service, and as I understand it someone compromised my IP address and is using it to download child pornography,” he said. “I might just be a random target. But this could be an attempt to Qanon me. It’s an ugly world out there.” 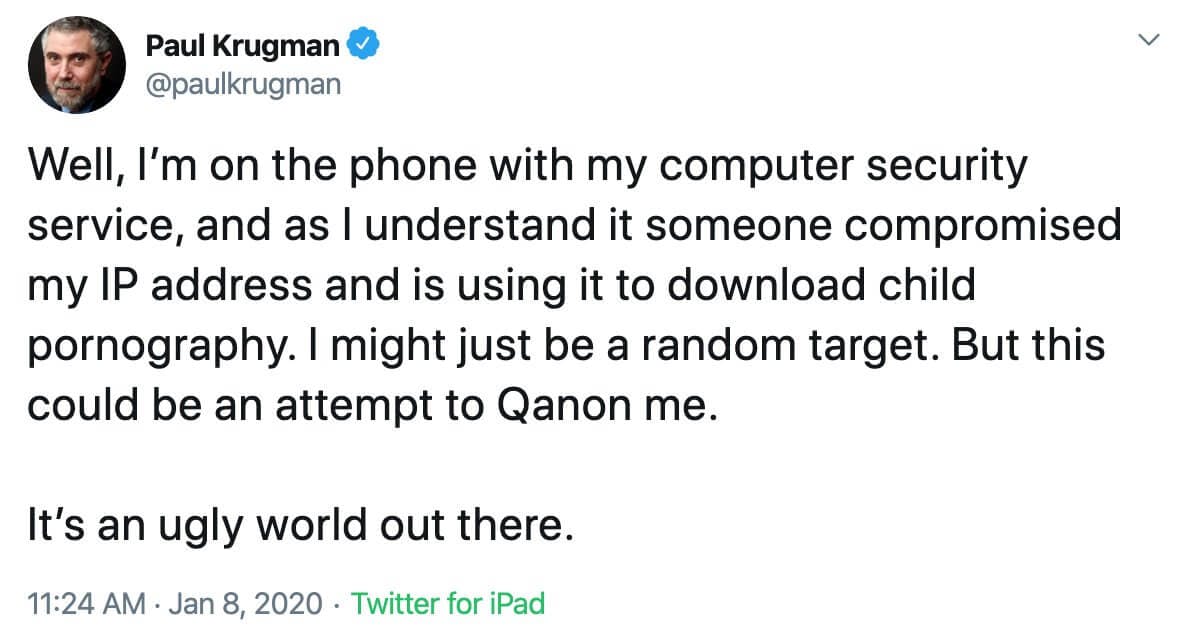 Krugman’s assertion was immediately bombarded by QAnon adherents, who accused the author of attempting to cover up his involvement in pedophilia. The comments only intensified when Krugman stated that he had contacted the Times to investigate the issue.

“Q is destroying the global pedo ring, so if you are being QAnoned, then you must be a pedo,” Twitter user @IdyllicLiving said.

Q exposes the truth and light. It's wonderful to be Q'd. To bad you Q yourself and bring light to him. https://t.co/wIslqUwKli

Despite claims from conspiracists, Krugman’s tweet offers several clues to what likely took place. For starters, being contacted over the phone by someone alleging to have information on your computer’s security raises numerous red flags. The allegation that his “IP address was compromised” also makes little technical sense.

The scenario is nearly identical, however, to a well-known scam reported by the Better Business Bureau (BBB) in March of last year.

One version of the scam involves receiving a pop-up notification on one’s computer that alleges to be from a well-known tech company. The message warns users that their IP address has been compromised. In the second version, the scam, just as Krugman describes, is carried out over the phone.

“In some reports, scammers claim child pornography websites are using your IP address, and you could be held responsible for their actions,” the BBB notes. “In a second version of the scam, you simply receive a call out of the blue from someone making similar claims.”

The scammers can then request to be given remote access to the computer or demand payment to fix the fabricated issue.

The Daily Dot’s findings appear to have been confirmed by Krugman, who later admitted on Twitter that the incident was likely a scam.

“Deleted original tweet. Times thinks it may have been a scam,” Krugman tweeted. “Anyway, will have more security in future.”

Deleted original tweet. Times thinks it may have been a scam. Anyway, will have more security in future

Despite the mystery appearing to be solved, QAnon believers and other far-right internet users have refused to give up on their unfounded conspiracies.

Unfortunately, this is far from the first time Krugman has openly struggled with modern technology. A collection of Krugman’s previous tweets shows the author confusingly commenting on everything, from his credit card to emails about bitcoin.

So, a day in the modern world: my credit card was just suspended, because somebody tried to use it to buy ads on Facebook. At least the fraud department caught it. I wonder whether the buyer had a Russian accent …

Apple may avoid billions in taxes by booking profits in tax havens, but it does provide good customer service. I THINK the Apple Store has removed the virus that was crippling my computer

The Times has not publicly commented on the incident involving Krugman at the time of publication.