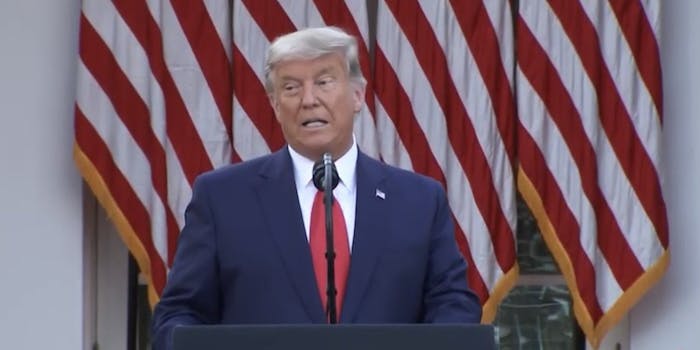 Trump straight-up calls for the election to be overturned

The president is having trouble finding support for his legal fights, instead, tweeting an alarming demand.

President Donald Trump tweeted that the 2020 election should be overturned Wednesday morning, an alarming call from a sitting president who has yet to concede a race he lost.

Trump has frequently boasted and claimed that he did not lose and that the numbers only show he lost because of voter fraud, a fraudulent claim that has been debunked every single time it’s been raised.

Now it appears Trump is admitting he lost and calling for the election to be overturned, an outright call to upend American democracy.

Twitter has yet to label or restrict Trump’s tweet, which could be considered an outright call for a coup, especially given how adamant his followers have been about dying for Trump to remain in office.

Trump, regardless of his tweets, is having trouble finding support for his call to overturn the election. Last night, the Supreme Court turned down a request to hear a suit out of Pennsylvania looking to reject the state’s vote for President-elect Joe Biden.