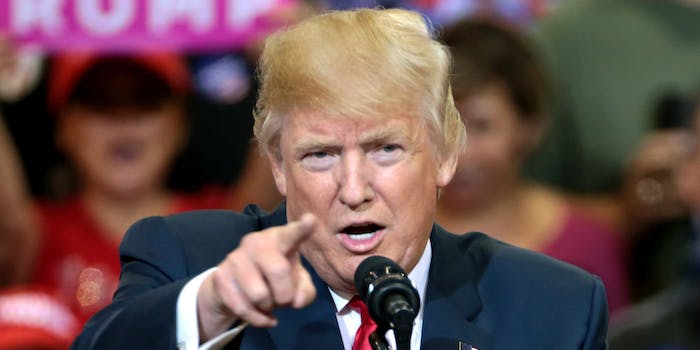 No, Trump didn’t tweet he ‘would never let thousands of Americans die from a pandemic’

But several legitimate tweets from the president bear similar messages.

An alleged tweet circulating online claims to show Donald Trump stating in 2009 that he would have never let thousands of Americans die during a pandemic.

Screenshots of the alleged tweet, in which Trump criticizes then-President Obama for his response to the H1N1 pandemic at the time, began circulating earlier this month.

“Obama’s handling of this whole pandemic has been terrible! As President, ALL responsibility becomes yours during a crisis like this, whether or not you’re entirely to blame,” the screenshot reads. “John McCain, and for that matter myself, would never let thousands of Americans die from a pandemic while in office.”

While the image has been shared countless times across social media, the tweet is completely doctored. Trump never made such a statement in 2009.

As noted by fact-checking website Snopes, the tweet does not appear on Trump’s timeline and is nowhere to be found in the “Trump Twitter Archive or Fact Base’s archive of deleted tweets.”

The fake tweet does, however, appear to be based off of actual statements from Trump.

The billionaire tweeted in 2013 that leaders are always responsible for what happens under their watch.

The tweet has recently gained widespread attention after Trump asserted last month that he takes no responsibility for the U.S. government’s failure to adequately respond to the coronavirus pandemic.

Trump also criticized Obama’s response to the 2009 H1N1 pandemic on Friday, stating that “17,000 people died unnecessarily” even though more than 37,000 have died so far due to the coronavirus.

But even Trump’s real tweets are filled with falsehoods. Snopes adds that CDC statistics show 12,469 people, not 17,000, died during the 2009 pandemic. Polls conducted at the time also found that a majority of Americans approved of the Obama administration’s response, despite Trump’s claims that they received “disastrous approval numbers.”

The president also pointed to failures surrounding the launch of the Obamacare website. Trump’s reference could be linked to recent failures on the IRS website after a tool for checking the status of stimulus checks was announced. The Obamacare website did not cost $5 billion either. An independent analysis from 2014 found that the cost was much closer to $2.1 billion.