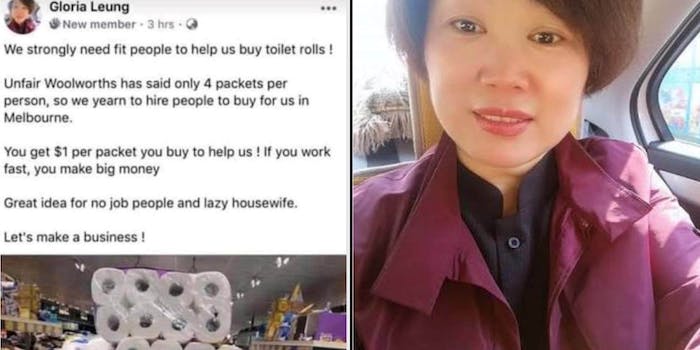 Right-wing Facebook pages have fallen for what appears to be a fake account of a Chinese woman hoarding toilet paper, BuzzFeed News reports.

The user in question, known as “Gloria Leung,” recently joined a Facebook group out of Australia and began offering to pay members to buy her toilet paper.

“You get $1 per packet you buy to help us!” Leung said in the group. “If you work fast, you make big money.”

The post was immediately picked up by numerous right-wing pages including “The Quiet Australian,” which called on its followers to “name and shame” the woman.”

“How Un Australian Is This Chinese Woman – name and shame!” the post said.

But as it turns out, Leung may not even be an actual person. For starters, Leung’s profile was only just created on March 8. BuzzFeed News further notes that “there doesn’t appear to be any trace of Leung” on the internet prior to this month either.

Leung’s profile picture was also traced back to an Airbnb profile for a user in the U.K. named Jenny. The image also is the very first picture that shows up on Google when searching for the term “Chinese lady.”

Even the picture of the toilet paper shared by Leung was traced back to an unrelated Twitter account.