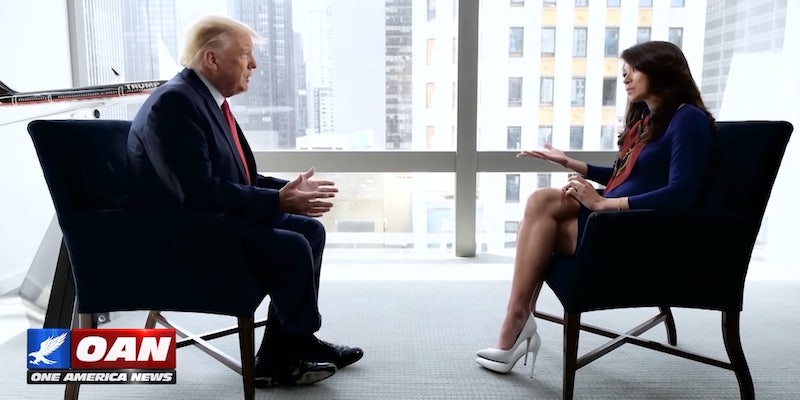 'This also has a Chappelle Show skit mocking a propaganda network using a flight attendant look about it.'

One America News Network‘s (OAN) recent exclusive interview with former President Donald Trump is drawing attention to the network for all the wrong reasons.

OAN is a far-right, propaganda-heavy outlet that’s spent the last several years exalting Trump. So it’s not exactly a shock that the notoriously vainglorious former commander-in-chief granted an interview to the outlet that recently got busted for airing an anti-President Joe Biden documentary that was created by Russian spies.

The piece didn’t cast Trump, OAN, or interviewer Chanel Rion in a particularly flattering light. In fact, it didn’t cast them in much light at all—with many people online pointing out the lackluster production quality.

“VHS quality for every OAN broadcast. Nothing but the best,” commented one Twitter user.

“This is the first time I’ve seen anything from OAN. My college journalism program (almost 20 years ago) looked more professional than that clip. How? Does it always look like a high school morning announcement feed?” wondered another.

The shoddy production quality was just one of many things inspiring mockery. People tore the interview apart.

Many picked up on big propaganda vibes with a little bit of fascist dictatorship thrown in.

“The term ‘North Koreaesque’ is used a lot these days but,” tweeted the Washington Post correspondent Philip Bump.

Rion heaped praise on Trump, at one point saying he “forever altered the course of American history.” People agreed—just not in the positive way Rion clearly intended.

Commentators were unsparing in their criticisms of Rion, with some wondering why she felt the need to clarify that New York City is in New York state.

Of course, the segment did have some fans.

Actor Randy Quaid tweeted, “The Chanel Rion interview with Trump was like being immersed in a refreshing Truth bath.”