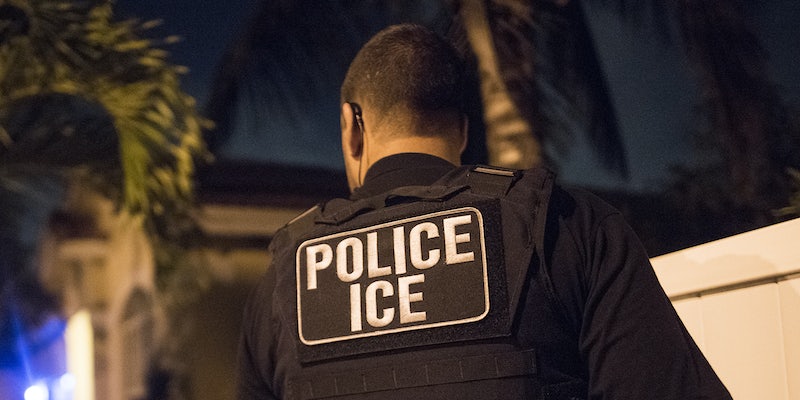 Some wonder if Russia is amplifying it.

The tale of “forced hysterectomies” at an Immigration and Customs Enforcement facility in Georgia was certain to create a firestorm. As soon as it broke, the story zoomed across the internet. Congresspersons, major national organizations, celebrities, and other high-profile entities and individuals rushed to share it and weigh in.

Now some are wondering whether it was proper for media outlets to report on the thinly sourced allegations without independently vetting them. A few believe the allegation itself—whether true or not, which is far from clear—is being amplified by nefarious actors, potentially foreign, in the hopes of interfering with the upcoming election specifically and American political discourse generally. If the allegations turn out to be false or overblown, many in the media, including major outlets that have eagerly repeated it, would lose credibility. And if we can’t trust the media, how can we know what’s true?

According to reporting that first appeared in the somewhat lesser-known outlet Law & Crime midday yesterday, a whistleblower complaint alleges that large numbers of detained immigrant women at the Irwin County Detention Center (ICDC) are getting hysterectomies for dubious reasons, and that some aren’t properly informed they’re receiving this procedure.

“‘Like an experimental concentration camp’: Whistleblower complaint alleges mass hysterectomies at ICE detention center,” Law & Crime’s headline shrieked. “Experimental concentration camp” is a part of a quote from an unnamed immigrant woman cited in the complaint. The word “mass” doesn’t appear in the complaint. “Forced,” which others have used to describe these alleged procedures, appears only once in a line about shared phones.

The complaint specifically only states “this complaint raises red flags regarding the rate at which hysterectomies are performed on immigrant women under ICE custody at ICDC.”

The sourcing is all currently secondhand.

Several immigrant women have reported to Project South their concerns about how many women have received a hysterectomy while detained at ICDC. One woman told Project South in 2019 that Irwin sends many women to see a particular gynecologist outside the facility but that some women did not trust him. She also stated that “a lot of women here go through a hysterectomy”

“U.S. Immigration and Customs Enforcement (ICE) does not comment on matters presented to the Office of the Inspector General, which provides independent oversight and accountability within the U.S. Department of Homeland Security. ICE takes all allegations seriously and defers to the OIG regarding any potential investigation and/or results,” ICE spokesperson Lindsay Williams told the Daily Dot.

In its piece, Law & Crime cited a story the Intercept published two hours earlier. The Intercept reported that the whistleblower, a nurse in the facility, claimed that ICDC was failing miserably at providing proper coronavirus precautions. The nurse called it a “silent pandemic.”

The Intercept did not, however, mention hysterectomies once.

As tale of forced hysterectomies burned across social media, questions arose, including among media observers, as to why the Intercept, which broke the story and linked to the complete complaint, failed to include the most shocking allegations therein.

The press release about the complaint on the Government Accountability Project website similarly doesn’t mention detained immigrant women being unwillingly sterilized—an odd omission given its explosiveness. Caution was nevertheless thrown to the wind. Major media outlets churned out story after story about hysterectomies at ICDC. Some reported detainees were receiving potentially unnecessary hysterectomies, others went further and wrote of “mass” or “forced” hysterectomies. The most extreme ran with the whistleblower’s, Nurse Dawn Wooten, claim that the doctor who performed them was known as “the uterus collector.”

The majority seemed to take the account at face value. Admittedly, the U.S. has a sordid history concerning eugenics. And it may be even easier to believe such barbarism occurring at ICE facilities in this era of family separations, kids in cages, and deportations of unaccompanied children potentially infected with coronavirus.

This was hardly the first story claiming immigrants are poorly treated at ICE facilities. But this was among the most egregious. As headlines stacked up and major accounts amplified it, “forced hysterectomies” trended on Twitter.

Before long, the narrative included eugenics; genocide; and Nazis, who committed atrocities during World War II, in addition to horrific sterilization experiments. In the midst of the fervor, a few urged caution. To them, the story seemed too clickable, too destined to go viral, and too damning to run with unheeded.

Twitter user @wokyleeks (“Leeks”) was among the skeptics. Leeks, who asked to remain anonymous and told the Daily Dot that they’re a former Google employee fired for whistleblowing about white supremacists at the company, believes that Russian interference could explain the sordid story’s rapid spread.

“…[T]he level of vitriol and types of accounts (GRU/IRA botnets) lead me to realize this story was getting digital air support,” Leeks tweeted as the allegations burned across the internet yesterday. (IRA refers to Russia’s Internet Research Agency troll farm that interfered in the 2016 election.)

Others echoed Leeks’ call for caution, among them medical professionals who were willing to believe this could happen, but wondered why there wasn’t more corroboration, such as from other nurses, doctors, medical billing companies, etc.

“That a horrible OB/GYN is doing this for money and/or eugenics by partnering with a private detention facility is sadly very believable,” tweeted Dr. Jennifer Gunter, an obstetrician-gynecologist.

“A hysterectomy requires anesthesia and OR personnel so if this was happening frequently at one hospital it shouldn’t be hard to investigate and maybe other people will step forward,” Dr. Gunter added in a subsequent tweet. “Hospitals don’t approve surgeries without knowing $ is coming in, so lots of questions.”

A closer inspection of the complaint reveals further deficiencies in the reporting now circulating. This doesn’t mean it isn’t true, but that it may be more responsible to wait for more facts to come to light before reporting it.

First and foremost, no one has spoken with a single woman who says she received a hysterectomy while at ICDC. Of the women who spoke to representatives from Project South, a legal advocacy group that submitted the complaint to the Office of Inspector General, one is the nurse and three are unnamed immigrant women. Only one of those women alleges seeing the doctor. She doesn’t appear to have received a hysterectomy, based on the complaint.

Neither Project South nor the Government Accountability Project responded to an inquiry from the Daily Dot.

Project South Director Azadeh Shahshahani told a podcast today that it’s difficult to calculate an exact number of women who’ve received hysterectomies. “We’ve talked to a number of women, 10 women recently, and some of them have talked about hearing about other women having this experience, some of them have talked about themselves having this experience,” Shahshahani said.

Neither the doctor or any of the patients who allegedly received a hysterectomy are identified by name, nor are specific dates of the procedures, alleged to have occurred in the last two years, or numbers of women who received them.

This explains the reticence of some to repeat the hysterectomy allegations and why they’re somewhat buried in the whistleblower complaint itself. Although undeniably the most egregious of the claims, it appears on page 18 of the 27-page document and only takes up two pages. The other 25 excruciatingly detail the alleged lack of proper coronavirus precautions.

While it certainly isn’t clear that the Kremlin had anything to do with the way the story spread like wildfire and across social media, as Leeks alleges, there are very good reasons why a few outlets have chosen to remain mum about forced hysterectomies, genocide, and eugenics until more is known.

“In general, anonymous, unproven allegations, made without any fact-checkable specifics, should be treated with the appropriate skepticism they deserve,” ICE said.

Government agencies pushing back on a headline may not deserve the benefit of the doubt, but in this case, ICE has flagged a very real reporting concern.