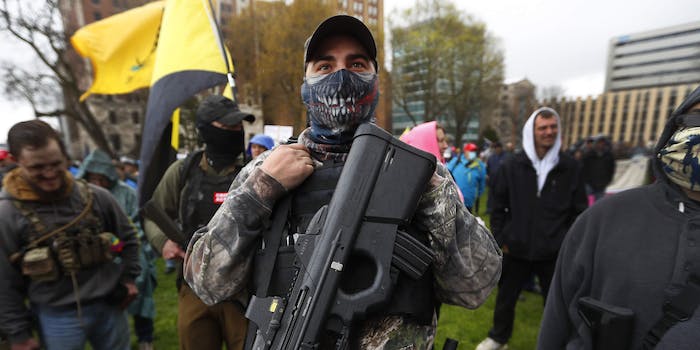 His dual standards are showing.

President Donald Trump has come under fire for calling armed protesters “very good people” this morning, as he referenced the “Reopen” movement.

Many swiftly recalled that he referred to former NFL quarterback Colin Kaepernick as a “son of a bitch” for simply kneeling during the national anthem.

It also brought back echoes of his Charlottesville comments in the wake of neo-Nazi protests.

Protesters clashed with police, chanting, “Let us in,” “Heil Hitler,” and “Heil Whitmer.”

At the time, lawmakers were inside the capitol debating the governor’s request to extend her emergency powers during the pandemic. The request failed to pass in the Republican-controlled legislature.

One state senator tweeted that some legislators were wearing bulletproof vests due to fear of the armed protesters.

The protest itself violated social distancing orders and was, hence, unlawful.

“The governor of Michigan should give a little, and put out the fire. These are very good people, but they are angry,” Trump tweeted. “They want their lives back again, safely! See them, talk to them, make a deal.”

People immediately noticed two things about Trump’s language: 1) it was eerily similar to him calling the Unite the Right protesters “very fine people,” and 2) he called Kaepernick a “son of a bitch” for kneeling during the national anthem to protest police brutality against Black people.

The comparison of Kaepernick’s and the lockdown protesters’ treatment has been around for a while.

To many, the dual standards smack of racism. The lockdown protesters have been overwhelming white; NFL players involved in the anthem protests overwhelming Black.

“Angry mob brandishing military-grade weapons because they’re mad at having to stay at home = ‘good people,'” tweeted @itsJeffTiedrich, “Athlete taking a knee to protest centuries of systemic racism = ‘son of a b.'”

Michigan is one of the nation’s coronavirus hotspots. There have been 41,000 confirmed cases and nearly 4,000 deaths from the virus in the state.