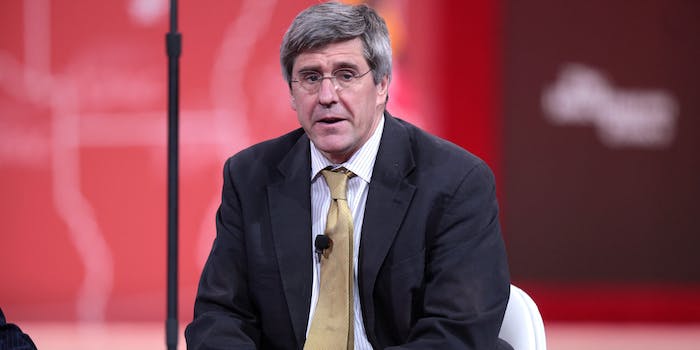 'They are protesting against injustice and a loss of liberties,' he said of the protesters who are unhappy with stay-at-home orders.

The comment came as protesters expressed frustration with stay-at-home orders meant to quell the spread of the new coronavirus. Several of the protesters—along with President Donald Trump and other Republicans—have pushed for mass reopenings.

“I call these people modern-day Rosa Parks,” Moore told the Washington Post of the protesters. “They are protesting against injustice and a loss of liberties.”

He echoed a similar sentiment to CBS News.

“It’s interesting to me that the right has become more the Rosa Parks of the world than the left is,” he said.

Moore is one of several officials in Trump’s back-to-work council. He is also part of a coalition of conservative leaders working against statewide and business shutdowns. According to the HuffPost, he dropped out of consideration to serve on the Federal Reserve Board last year amid concerns about his qualifications.

On Twitter, critics noted that Moore shouldn’t be equating protesters against federal safety guidelines to the fight against racial injustice sparked by Parks when she refused to give up her seat on a bus to a white passenger nearly 65 years ago.

Moore’s claim was made after Trump led a verbal assault against Democratic-led states enforcing stringent stay-at-home orders. In Michigan on Wednesday, a group of conservative protesters rallied against Democratic Gov. Gretchen Whitmer who previously added additional restrictions to the state’s stay-at-home order. According to the Washington Post, many of the protesters waved American and MAGA flags, with some screaming “Lock her up!” and “We will not comply!”

Still, public health experts have said it’s too soon to lift stay-at-home mandates, warning that doing so could lead to a second wave of the pandemic.