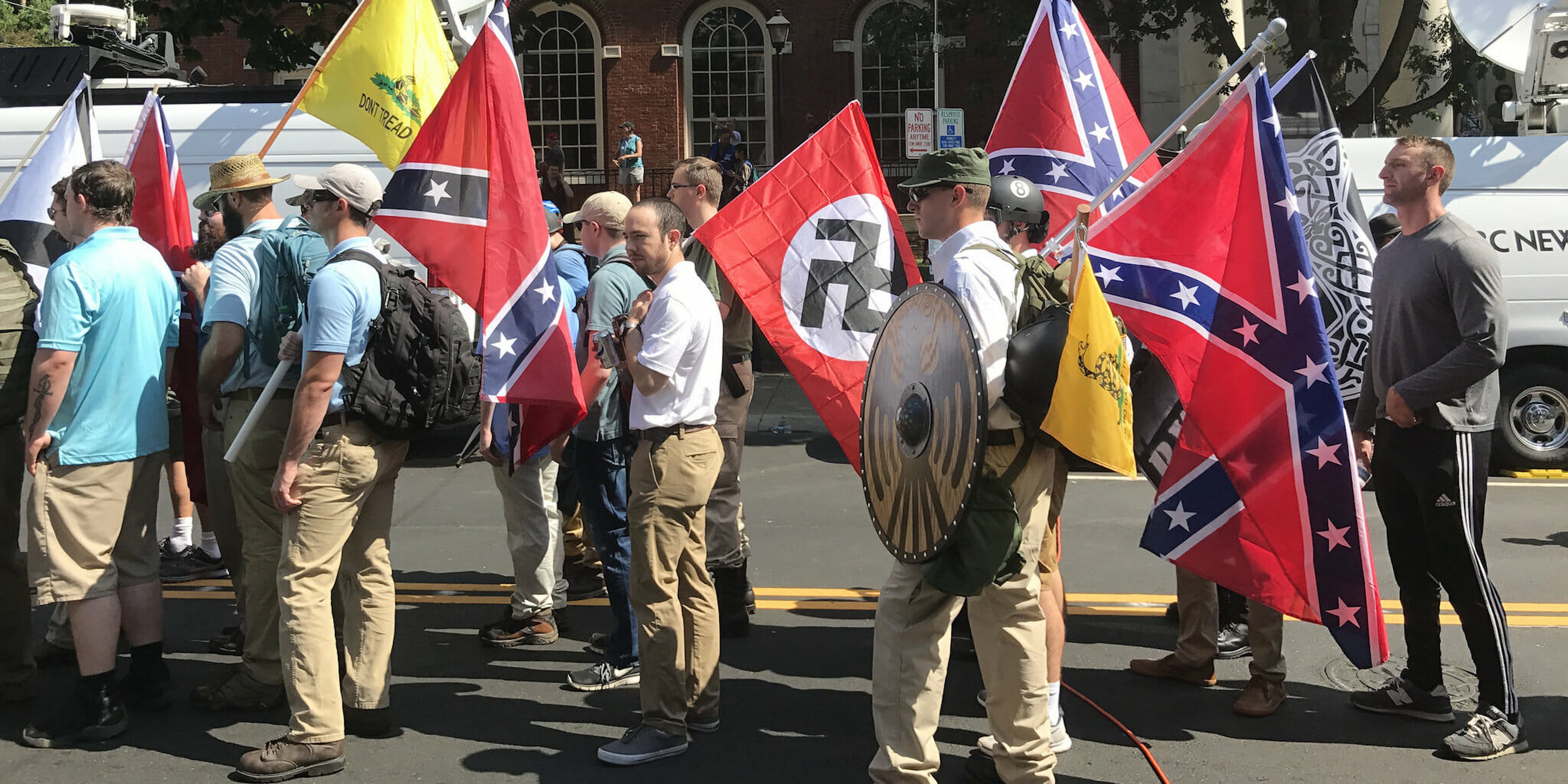 In chat rooms, Unite the Right organizers planned to obscure their racism

Unite the Right organizers had a plan. Then it came crashing down.

BY AARON SANKIN and SCOTT PHAM

Organizers of the Unite the Right rally had a clear plan, according to the group’s chat and conference calls: Avoid obvious neo-Nazi and Ku Klux Klan symbols. Appeal to the white, conservative mainstream. Don’t start violence, but feel free to provoke it.

The group’s best-laid plans failed spectacularly, unraveled by organizers’ inability to control the Charlottesville, Virginia, crowd that had been whipped up into a frenzy by the rhetoric of the white nationalist movement.

A review of the chat logs and audio recordings by Reveal from The Center for Investigative Reporting shows that the event’s organizers worked to obscure the most racist elements of their movement from public view, yet did not want to repudiate it internally.

“Going up to MSNBC and them interviewing you saying we should kill every non-white on the planet—I don’t necessarily have an issue with listening to that on a podcast or whatever, but if you are going to do something like that, even if it’s your true belief, that’s not the objective of this rally,” Unite the Right organizer Eli Mosley said during a conference call in the days leading up to the Aug. 12 event.

“The objective is to gain sympathy for a pro-white rally and against an erasure of history and this communist shit that we all are aware of,”  he said.

Mosley, who took over leadership of the white nationalist group Identity Evropa earlier this week, cautioned against extreme violence: “If this rally turns into a crazy street brawl that we started, that’s not as good as if we had gone there, said what we had to say, and let the left look like idiots.”

This planning occurred via the online platform Discord. Originally created for video gaming enthusiasts to converse via text and calls while playing their favorite games, Discord became a meetup place for members of the far right in the run-up to the 2016 election. Many of the Discord channels Reveal reviewed were shut down by the company in the days following the Charlottesville rally.

More than 35,000 messages from the “Charlottesville 2.0” forum were shared by Unicorn Riot, a cache far exceeding the individual screenshots previously published by Unicorn Riot and reported on by other media outlets. An analysis of the 10 weeks of communications paints the picture of a gradually coalescing movement well aware its actions would almost certainly trigger fierce and violent clashes with counterprotesters.

Reveal could not independently verify the authenticity of the messages. A representative from Unicorn Riot, a media outlet that has been has been deeply critical of far-right movements, said that he had seen white supremacist chat rooms in the Discord app while participants were still actively chatting. A reporter for Wired magazine confirmed with a prominent Unite the Right organizer that a first batch of messages and recordings published on Unicorn Riot appeared authentic.

The communications before and after the event show that:

That was clearly the intent of last weekend’s right-wing protests in the San Francisco Bay Area, where organizers disavowed white supremacy, but reveled in inciting confrontations that would make their opponents appear violent and unhinged.

An analysis of all the links posted to the Discord server showed that, outside of sharing information from mainstream platforms like YouTube, Facebook and Airbnb, the most commonly shared site was Daily Stormer, the neo-Nazi hub. The prevalence of links to the Daily Stormer shows just how influential the site is in the white supremacist ecosystem.

The server used to plan the Unite the Right rally, Charlottesville 2.0, had hundreds of users by the time it was shut down shortly after the event.

But it remained active during the rally, with more than 1,600 messages posted to its most popular chat room on the day of the event. When Nazi images intermingled with Confederate flags during the rally, some Charlottesville 2.0 participants seemed disappointed they weren’t able to keep their group swastika-free. “Welp one group decided to bring swastika flags because I saw multiple on streams,” wrote one user.

Much of the discussion was centered around how the event would look to the outside world.

Keeping these particular symbols of white supremacy out of sight at the rally was part of a strategy to win more followers. In one chat, a user suggests that National Rifle Association members are only a good, strong push away from advocating open white supremacy.

“Bring your MAGA hats if you’ve got ’em,” Kessler wrote in a June post. “If Antifa fucks with us it’ll look like average Trump supporters … are under attack.”

Organizers advised attendees planning to bring guns, which proved to be a popular choice, to be extremely judicious about using them.

“We are not going to prevent anyone or take anyone’s guns as long as you guys are doing it legally,” an organizer said in one group planning conference call. “If you use your weapon, you’re going to be national news, (George) Zimmerman-style—even if you are totally in the right. Zimmerman did nothing wrong too. I would basically tell anyone who is bringing a gun or bringing a weapon that you should only be using that as a method to save your life.”

In the end, one Unite the Right protester did end up firing a gun toward a black counterprotester in the midst of clashes during the event.

From their communications it’s clear the rally’s organizers knew what they were doing had the potential to provoke violence. They debated how best to protect themselves when fights inevitably broke out.

“I recommend you bring picket sign posts shields and other self-defense implements which can be turned from a free speech tool to a self-defense weapon should things turn ugly,” Kessler wrote.

Some suggested the military-style body armor also served a propaganda purpose, reinforcing the argument that they had reason to protect themselves from violent counterprotesters.

Plans for deployment during the rally were complex and detailed, including schematics that resembled battle plans—or football plays.

The planning even included what to do if questioned by police following any violent altercations with counterprotesters. The organizers advised falling back on the self-defense defense.

“If you find yourself confronted by Antifa,” one user wrote, “Remeber (sic) you ‘Felt your life threatened’ and do not try to justify anything you did to the cops.”

Neither Kessler nor Mosley responded to requests for comment.

Once in Charlottesville, the platform served as a way for attendees to communicate with one another about what was happening.

The march across the University of Virginia campus to a statue of Thomas Jefferson on Aug. 11,  the Friday night before the main event, was largely rated a success on Discord, especially one aspect: how they were able to goad counterprotesters into fistfights, which they then gleefully joined.

“The fight was a thing of beauty,” one user wrote. “Antifa were gathered around the statue. We surrounded them. They threw the first punch and it was on. Within three minutes the statue was ours and Antifa was running scared.”

Users expressed concerns about antifa doing everything from tipping over portable bathrooms while rally attendees were inside to spraying super soakers filled with gasoline at them while they carried lit tiki torches. Others told them to get a spine—or a gun.

“If anybody is scared of a conflict with antifa,” wrote one user, “youre (sic) probably in the wrong place.”

“I feel like antifa are less likely to fuck with us if we’re armed to the teeth,” added another.

On the day of the protest, the forum’s gleeful banter evaporated with the news of the car plowing into counterprotesters.

The most common first reaction was a realization that the PR campaign had been lost: the only narrative that could come out of the event was that their side might have committed murder.

Nevertheless, some looked for other explanations. Numerous posts speculated that James Fields Jr., the Nazi sympathizer police say drove the Dodge Charger into the crowd, had a Jewish parent. That formed the basis for a so-called false flag conspiracy theory akin to the one spread by InfoWars host Alex Jones.

Within minutes of news about the attack circulating in the chat, a few jokes appeared. “Running over lefties? Yes totally justifiable lol,” a user wrote. The forum was soon filled with memes making light of the tragedy.

Examples included callous riffs on photos of Fields plowing through a crowd of counterprotesters. One labeled it a video game. Another focused on the African American man flying through the air behind the car, saying, “The floor is child support.”

Another highlighted the make and model of the car Fields was driving, calling it “The Dodge Charger of Racial Cleansing.”

That evening, Kessler interjected to discourage users from mocking the tragedy.

“The fact that someone died is not a joke,” he wrote. “If you’re going to keep making those jokes leave the fucking server.”

However, Kessler himself had trouble adhering to that kind of message discipline. Days after the event, he tweeted, “Heather Heyer was a fat, disgusting Communist. Communists have killed 94 million. Looks like it was payback time.”

When that post drew a massive backlash, Kessler first said his account had been hacked and then, admitting that was a lie, blamed his actions on mixing alcohol with prescription medications.

Reaction to President Trump’s initial statement blaming “many sides” for the rally violence was mixed.

Some suggested Trump was limited in how full-throated he could be in public supporting an openly white supremacist cause. That led to debate about what the president really meant and where his loyalties lie.

“He didn’t outright condemn us,” noted one user.

“I think this is intentional,” responded another.

“Of course it’s intentionally ambiguous,” added a third. “He can’t play both sides by going on in on one side.”