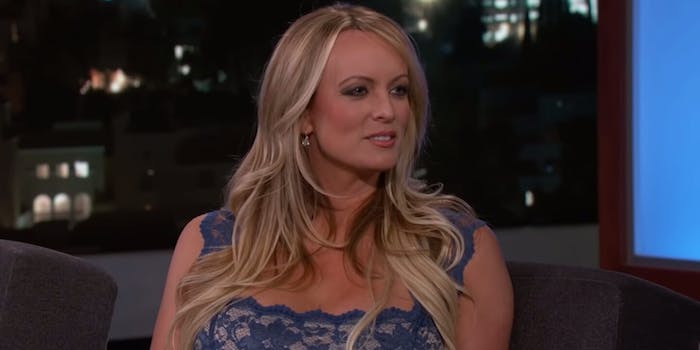 Daniels has responded to the resurfaced 2018 article.

Conservative corners of social media dug up an old article from the trenches of the internet, hoping to discredit adult film star Stormy Daniels who said she had an affair with President Donald Trump.

Multiple conservative users tweeted out the article on Tuesday, seeming to insinuate that the article was recently published. Some called for people to apologize to President Trump.

The film star, whose real name is Stephanie Clifford, called out users on Twitter for recirculating the 2018 story, saying the statement the story focuses on was written by past Trump lawyer Michael Cohen when she “was being bullied/afraid to speak the truth.”

“The poor delusional, women-blaming trump zombies are mass tweeting this article while being too dumb to check the date,” Daniels tweeted.

Daniels signed a nondisclosure agreement back in October 2016, prior to the presidential election, “accepting $130,000 in exchange to for her pledge to not talk publicly about a relationship with Trump,” the Washington Post reports. Although Daniels initially denied having an affair with Trump, a March 2018 lawsuit she filed against Trump “served as confirmation on her part of the affair,” according to Vox.

About 56% of voters said they believed Trump and Daniels had an affair, according to a March 2018 poll from POLITICO and media company Morning Consult.

However, Daniels’ resolute proclamations have not silenced some deniers who have flooded her Twitter mentions and replies.

Although the pushback remains, Daniels has continued to remain resolute in her story, tweeting that she’s “owned” her truth.