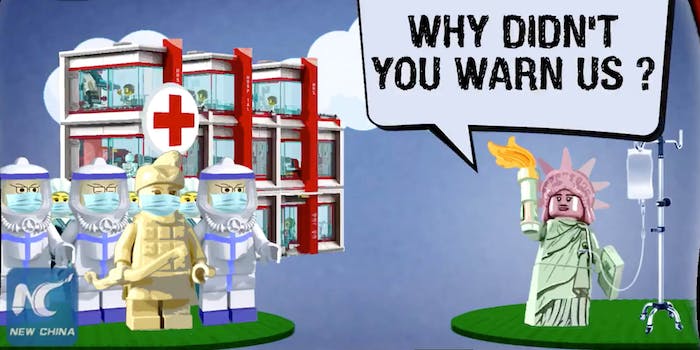 The propaganda war between the U.S. and China is intensifying.

Chinese state-run media is taking aim at President Donald Trump’s response to the coronavirus as both countries attempt to pin the blame for the global pandemic.

Xinhua News Agency, the official government-backed press outlet of the People’s Republic of China, escalated the propaganda war on Twitter Thursday with the release of a video, titled “Once Upon a Virus.”

The clip shows Lego-style characters representative of China and the U.S. arguing over the seriousness of the virus from the beginning of the outbreak.

China, shown as numerous characters clad in protective medical equipment, is portrayed as responding responsibly to the virus while the U.S., characterized as the Statue of Liberty, repeatedly downplays the issue.

As of Thursday afternoon, the video had been shared more than 7,000 times and amassed well over 600,000 views.

Commenters sympathetic to China also responded with videos of their own, highlighting instances in which Trump and conservative pundits downplayed the virus during the early months of the outbreak.

Others hit back by highlighting China’s reported censorship of the doctor who first warned about the deadly virus before succumbing to COVID-19 himself.

The video comes amid allegations that the Trump administration is pressing the nation’s intelligence agencies to find a link between the virus and a laboratory in Wuhan.

Intelligence analysts fear that the White House’s demands, according to The New York Times, could “distort assessments about the virus,” thus leading the intelligence to be used as “a political weapon” in Trump’s public battle against Beijing.

The Office of the Director of National Intelligence even went as far as to release a statement on Thursday debunking conspiracy theories that claim the virus is “manmade or genetically modified.”

The statement goes on to note that the intelligence community is looking into whether the outbreak can be connected to the lab, although no public evidence backs up the unproven claim thus far.

“The IC will continue to rigorously examine emerging information and intelligence to determine whether the outbreak began through contact with infected animals or if it was the result of an accident at a laboratory in Wuhan,” the statement reads.

With the death toll in the U.S. rising past 61,000, the president has increased his attacks on China, as criticism of his response domestically intensifies.

“We just got hit by a vicious virus that should never have been allowed to escape China,” Trump said Thursday.

China has pushed back on claims of a potential link between COVID-19 and its lab in Wuhan as “unfounded and purely fabricated out of nothing.”