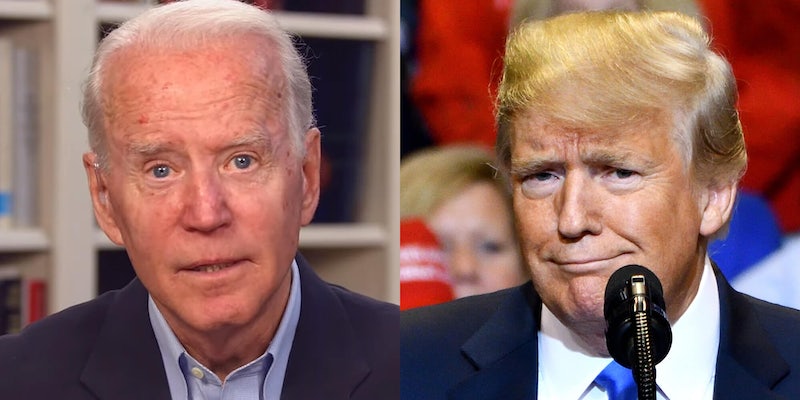 Has this clip of Biden with his tongue out destroyed the fabric of democracy?

Politics Twitter was agog at the 'deepfake.' But it's likely just a harmless gag.

As the technology behind deepfakes has grown, so too have concerns about how they could affect the very fabric of democracy.

Could someone make a video of a candidate using a racial slur, or show them switching long-held publicly-held positions?

Deepfakes are still relatively shoddy to produce and easy to debunk. But as they grow in quality, there are questions society will need to grapple with.

Those, however, don’t come out of this video of former Vice President Joe Biden sticking out his tongue.

President Donald Trump retweeted it last night and got trolled by the GIF maker, who changed his display name to “Trump & Biden Are Rapey.”

The video, which is very clearly a fake of Biden lolling his tongue about, sparked a host of concerns, predominantly from former George W. Bush speechwriter David Frum, who deemed that Trump had weaponized the technology against the American populace.

“It’s an important milestone that the first deployment of Deep Fake technology for electioneering purposes in a major Western democracy is by … the president of the United States,” Frum wrote in a series of tweets. “When people began talking about Deep Fake technology, they usually assumed it would be deployed by some anonymous hostile non-state actor … a no-return-address form of high-tech sabotage of democracy. Who imagined that the return address would be 1600 Pennsylvania Avenue?”

In a piece this morning at the Atlantic on it, Frum called it a “very real threat” and a “test of boundaries.”

And then, at 8:25:50 pm ET, the president retweeted an account he had never retweeted before…

Whatever the intentions of the original tweeter—it purports to be the account of a left-wing activist supportive of the candidacy of Bernie Sanders—the Trump retweet looks like an experimental test of the rules of social media. Since earlier this year, Twitter has banned images that have been “significantly and deceptively altered or fabricated,” especially if they are likely to cause serious harm in some way. Because the account retweeted by Trump explicitly labels its video a “deep fake,” it arguably does not violate Twitter’s anti-deception policy. As of 8:30 this morning, the video remained live on Twitter and present on pro-Trump Facebook accounts.

The late-April retweet is another step, and a big one. Instead of sharing deceptively edited video—as Trump and his allies have often done before—yesterday Trump for the first time shared a video that had been outrightly fabricated.”

It’s unclear what Frum is frantic about here. If the nefarious intention of a deepfake is to mislead, then his entire concern is undercut by the fact that the person who made it, Trump who retweeted it, and Frum himself are aware and admit it’s fake.

And if it readily comports with Twitter’s policy on manipulated media, it’s not really a dangerous test any more than driving 45 miles an hour in a 55 mile an hour speed limit would be.

And it’s not even that out of character of something that may have come from Biden, who has sucked on his wife’s finger during a rally and walked off the stage of his first virtual rally while it was going on. And in that sense, it easily classified as satirical, a well-protected class of speech, not that much different than a political cartoon showing the president with an exaggerated belly.

But others online were similarly shocked by Trump purportedly retweeting a deepfake. (If this is even literally a deepfake is up for debate, compared to just video editing and CGI.)

Deepfakes do raise concerns. But when someone literally says, this is a deepfake, it’s not quite the beginning of the end.