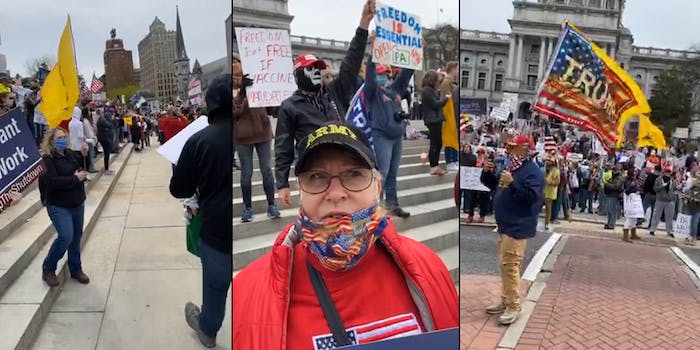 An increasing number of Americans are taking to the streets to protest quarantine restrictions. Most, if not all, of these events are planned and coordinated on Facebook.

Just three months have passed since the first case of coronavirus was identified in the U.S. It has infected 750,000 and killed 40,000.

Happily, social distancing and other quarantine efforts are beginning to show signs of success. Some states have begun formulating plans to gradually lift restrictions in coming weeks.

That’s not soon enough for some. An extremely vocal minority has begun demanding states reopen their economies.

Those events were just the beginning. Similar reopen protests are now planned across the country. Some are currently taking place.

Event organizers typically urge protesters to practice social distancing by remaining at least six feet apart or by staying in their cars.

That isn’t happening. At most events, protesters stand shoulder-to-shoulder, shouting and waving signs. Many wear no protective gear, such as masks or gloves.

People have been sharply critical of protesters for putting the rest of the country at risk of both infection and further prolonging quarantine. Even those who understand the frustrations have taken issue with their methods.

“It’s one thing to want state open but it’s another thing to protest without wearing masks to protect,” commented one observer.

Today, Facebook said that, after consultation with governments in California, New Jersey, and Nebraska, it’s clamping down on the use of its platform to promote anti-quarantine protests there.

CNN’s Donie O’Sullivan reports that Facebook is working with a handful of additional states to determine if upcoming protests violate social distancing guidelines. If so, it will take action.

While it’s seemingly reasonable for Facebook to stop promotions on these events, the social media giant working with the government to quash organized dissent on the platform could set a terrible precedent.

Meanwhile, events and groups promoting them are popping up all over the platform. One of the larger, more sophisticated events is planned in Virginia this Wednesday. More than 2,000 have indicated they may attend. The event page even offers attendees downloadable talking points.

These protests are inspired by a mix of desperation, anger, and conspiracy theories.

Event pages and livestreams are rife with comments from people who are out of work due to restrictions, which wreaked havoc on the economy. Alongside such complaints, there are false claims that the pandemic is a hoax or conspiracy—”plandemic” has increasingly been thrown around such circles in recent days—as well as claims that it’s being grossly exaggerated.

Some conspiracy theorists believe that China created and intentionally spread the virus. There is no evidence this is true.

Most events are officially nonpartisan, but conservatives appear to comprise the vast majority of protesters and organizers.

Protest organizers include far-right internet personalities, average citizens, and politicians. Some are attempting to monetize the events by selling T-shirts and other gear.

A trio of extremist gun-rights provocateurs is responsible for a disproportionate number of Facebook pages urging such protests, the Washington Post reports.

President Donald Trump himself has increasingly encouraged these protests. Last week, in a series of tweets, he urged people in states controlled by Democratic governors to “liberate.” Signs, flags and other memorabilia at the reopen protests bear Trump’s name, likeness, and campaign slogans.

As word spreads of Facebook’s plans to crack down on events that violate state guidelines, some have already begun taking proactive measures, such as creating duplicate events. Others are telling people to find protest information on alternative sites in case Facebook shuts them down.

So far, states have largely declined to use law enforcement to disband protests. That may change. Dozens of protests are planned in the weeks to come.