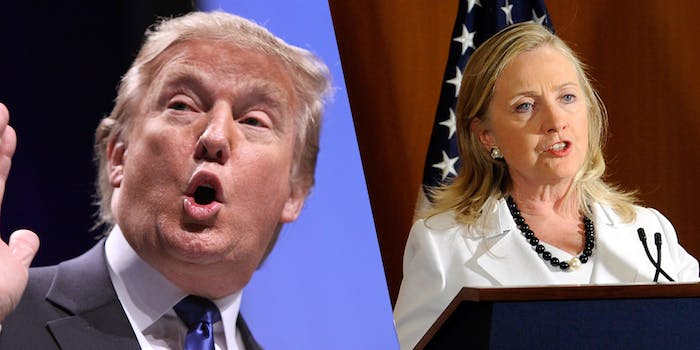 But he misquoted the FBI.

Donald Trump took to Twitter on Tuesday to express his dissatisfaction with how the FBI handled its investigation into whether Hillary Clinton and her staff violated federal law through its use of private email.

“The system is rigged,” Trump said, referring to a statement delivered moments before by James Comey, the director of the Federal Bureau of Investigation, outling the agency’s final position on the Clinton email scandal.

In a statement before the press Tuesday morning, Comey said the FBI would not seek charges against Clinton, nor her aides, for the “extremely careless” handling of classified materials.

The system is rigged. General Petraeus got in trouble for far less. Very very unfair! As usual, bad judgment.

Trump also wrote that Comey claimed Clinton—whom Trump refers to as “Crooked Hillary” in his messages—“compromised our national security,” misquoting the FBI director. While the FBI’s decision will undoubtedly remain steeped in political controversy, Comey said Tuesday that his agents carried out their duty in an “apolitical and professional” manner.

Trump went on to compare the Clinton email controversy to the federal charges brought against Gen. David Petraeus, the former Central Intelligence Agency director who pleaded guilty in March 2015, to a misdemeanor charge of mishandling classified information. “General Petraeus got in trouble for far less,” Trump said.

Petraeus resigned in November 2012 amid rumors of an extramarital affair. It was later revealed that he provided classified information to Paula Broadwell, the principal author of his biography with whom he had an affair. In April 2015, Petraeus was sentenced to two years’ probation and a $100,000 fine.

The investigation, Comey continued, was a “painstaking undertaking requiring thousands of hours,” involving interviews with dozens of current and former State Department employees. During the probe, the FBI reportedly inspected more than 30,000 emails and employed forensic techniques on multiple servers to recover deleted and archived messages not been previously turned over by Clinton.

“The system is rigged.”

While there is evidence that the targets of the investigation violated statutes regarding the handling of classified material, Comey asserted that “no reasonable prosecutor would bring such a case.”