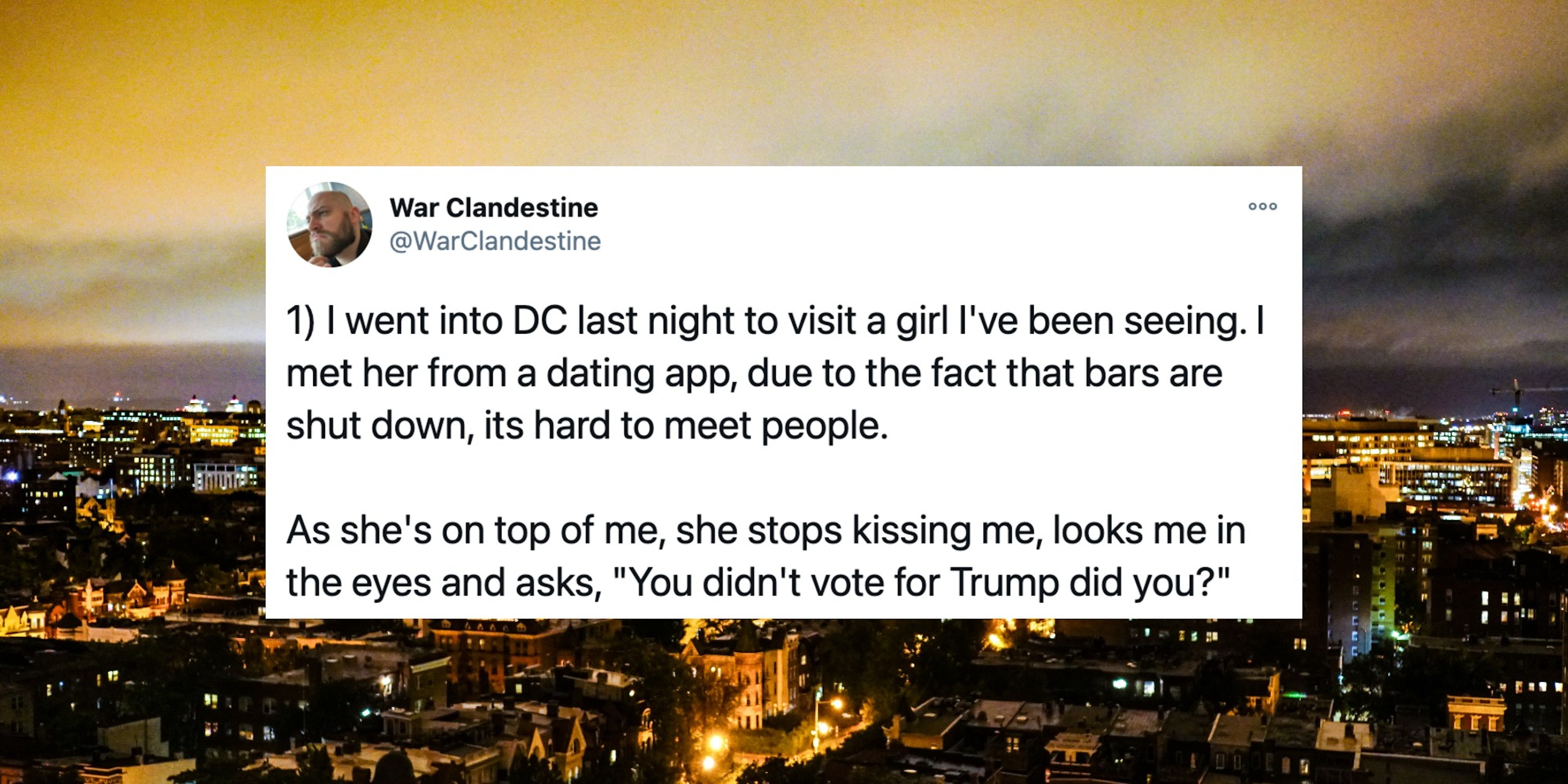 A supporter of President Donald Trump is being mocked online after publishing a lengthy Twitter thread detailing a “vision” he received following a date in the nation’s capital.

The Twitter user, known as “War Clandestine,” alleged that the epiphany unfolded shortly after he was asked whether he had voted for Trump while physically engaged with a local woman.

“I went into DC last night to visit a girl I’ve been seeing. I met her from a dating app, due to the fact that bars are shut down, its hard to meet people,” he wrote. “As she’s on top of me, she stops kissing me, looks me in the eyes and asks, ‘You didn’t vote for Trump did you?'”

Allegedly unwilling to fornicate with a woman not aboard the Trump train, War Clandestine says he responded by chugging a bottle of wine before slipping off into the cold night.

“I stared back at her for a brief moment, politely peeled her off of me. Then without a word, began putting my clothes and my shoes on,” he said. “She is frantically asking where I am going as I take the rest of the bottle of Syrah to the face. I said ‘I can’t see you anymore’ and left.”

On his journey home, War Clandestine says he became “overwhelmed with emotion” after pulling over on the George Washington Memorial Parkway.

“As I sit on the stone wall overlooking the river, frogs croaking, Washington Monument peering over the trees in the distance, DC lights illuminating the sky; I became overwhelmed with emotion,” he said.

That is when War Clandestine, likely fueled by Syrah and epididymal hypertension, began contemplating his hero’s devastating loss to President-elect Joe Biden.

A sign from the heavens in the form of a shooting star supposedly hurled itself across the night’s sky moments later, leading War Clandestine to petition the gods for answers to his political woes.

“I am not a religious man, but this is the closest I’ve ever felt to God. So I gave prayer a chance for the first time since I was a child,” the man said. “I asked God what is it that I am expected to do. My business is crippled. My People are persecuted. My country is tainted with corruption.”

War Clandestine’s attempts to wax poetic only furthered from there. But it was also then that he was gifted “a vision” from above, just as the elders had foretold.

“In order to vanquish the evil that lurks in the shadows, We must bring it into the light,” he added. “Simply eliminating a formless entity without the People knowing [they] existed, does NOT protect the future from the same fate. Illumination is the only way. Rather apropos, no?”

War Clandestine’s vision finally came to a crescendo. The voices in his head were certain of one thing: “this is not over.”

“I do not know what will happen. I do not know what Trump plans to do. However, I do know, on Jan 20th, Trump will remain in office,” he said. “In due time, all of us will see what it is we are meant to see. The darkness will be brought into the light, and in the end… God wins.”

Yes, you heard that right. War Clandestine’s supernatural moment was the realization that the nonsensical conspiracy theories fellow Trump supporters had been spreading since Election Day were undeniably true.

Amazed, or perhaps just dumbfounded, Twitter users weighed in on War Clandestine’s prophecy. Shockingly, some users argued that the vision was pure nonsense and likely fabricated by War Clandestine.

“The frogs croaking in mid-December is one of the more believable details,” @JonahDispatch said.

Others summarized the thread into its primary points, highlighting the jump from failed sexual encounter to QAnon revelation.

But not everyone was jealous of War Clandestine’s absolutely real and totally not fake experience. Fellow Trump supporters commented as well, applauding the man for his courageous stance.

“That was a beautiful story and it’s her loss handsome. Each of us comes to the precipice, each must find their own way down,” @pathicusfello said. “Keep Freedom, Liberty, Love, and Courage in your heart because tough decisions are coming. The life you’ve had may drastically altar, as the rest of ours.”

Only time will tell if War Clandestine’s visions will come to pass. Just don’t ask why frogs were out in the dead of winter in D.C., or how he saw a massive shooting star above a heavily light-polluted city, or why he was drinking and driving.