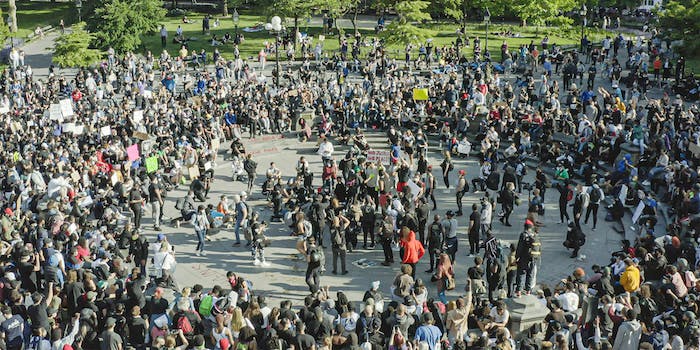 The lawmakers said they had 'deep and profound concerns' about the surveillance of the protests.

A group of 35 members of the House of Representatives is calling on federal law enforcement agencies to stop their surveillance of protests ongoing across the country against racism and police brutality.

The lawmakers made their demands in a letter to the heads of the Federal Bureau of Investigation (FBI), Drug Enforcement Administration (DEA), Customs and Border Protection (CBP), and the National Guard Bureau.

In the letter, the members of Congress said they have “deep and profound concerns” about the surveillance tactics used by the agencies and “demand that you cease any and all surveilling of Americans engaged in peaceful protests.”

The letter adds that the lawmakers know agencies have used Stingrays to collect cell phone information, facial recognition technology, and automated license plate readers. It also highlights that a number of articles have been written about how to protest and keep data safe.

“Americans should not have to take proactive measures to protect themselves from government surveillance before engaging in peaceful demonstration. The fact that the agencies you lead have created an environment in which such headlines are common is, in and of itself, an indication of the chilling effect of government surveillance on law-abiding Americans,” the lawmakers wrote. “For these reasons, we demand you cease surveilling peaceful protests immediately and permanently.”